A Successful Comeback for Kyle Reyes

Montréal, July 29, 2018 – Ontarian judoka Kyle Reyes stood on the second step of the podium on the last day of the Zagreb Grand Prix, in Croatia, his first competition after a few months off to heal a knee injury. His medal is the fourth one won by Canada during the competition. 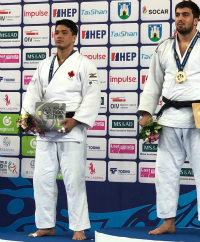 Kyles Reyes on the podium

“It’s been a while since I have won a medal, so I am happy. It was great to be back on the mat, and it was a very fun day.”

Reyes fought against Russian Niyaz Ilyasov in the -100 kg finale. The Russian put an end to the otherwise perfect day by scoring an ippon a little over one minute into the bout.

“I had this knee injury a while back, and I hurt it more in the semifinals. I sweat a lot and my knee started to move around, and I just felt a smack in my knee. I had to tape it up very hard for the final, so I couldn’t move too much. I could have done a much better fight,” said Reyes.

In the semifinal, the judoka from Brampton won against Azerbaijani Elkhan Mammadov after scoring an ippon and a waza-ari.

In the same weight category, Ontarian Shady El Nahas lost his only bout of the day.

Fighting in -90 kg, Louis Krieber-Gagnon, from Montréal, scored 2 wins and 1 loss, and Zachary Burt, from Oshawa, had a record of 1 win and 1 loss. 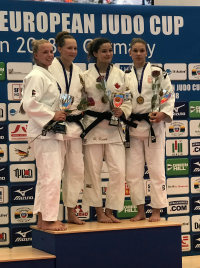 Hanako Kuno (second from the right) on the podium

“I’m pretty happy with how I was on the mat today. I had a good game plan with my coach, and I was very focused, and didn’t think about anything else. Everything went pretty smoothly and it worked out nicely in my favour.”

“Hana had a good day today. She worked very hard this week in training, and when she got here, she was strong, calm, and more confident,” said her coach, Jean-Pierre Cantin.

Her only loss of the day was the semifinal against German Annabelle Winzig, where she scored 2 points that were then taken off.

“She scored against the German, and the judges took it off. She scored again, and they took it off again. The first one was mitigated, but the second one was good. She persevered, and at some point, she made a small mistake. She leaned over, and her opponent took the opportunity to score an ippon,” explained her coach.

The 19-year-old ended with a bronze medal after scoring a waza-ari against Finn Emilia Kanerva in the bronze-medal bout.

“I had a really good game plan. I was very smart and very tactical, and I waited for the right moment to attack. I was tactical during the whole match and I am very happy with how I finished it.”

Ontarian Allayah Copeland (-78 kg) finished in 9th place after losing in repechage against German Arijana Peric. She was defeated twice.

Shianne Gronen (-70 kg), François Gauthier-Drapeau (-81 kg), and Benjamin Kendrick (-90 kg) were all eliminated after their first fight, and didn’t get a ranking.