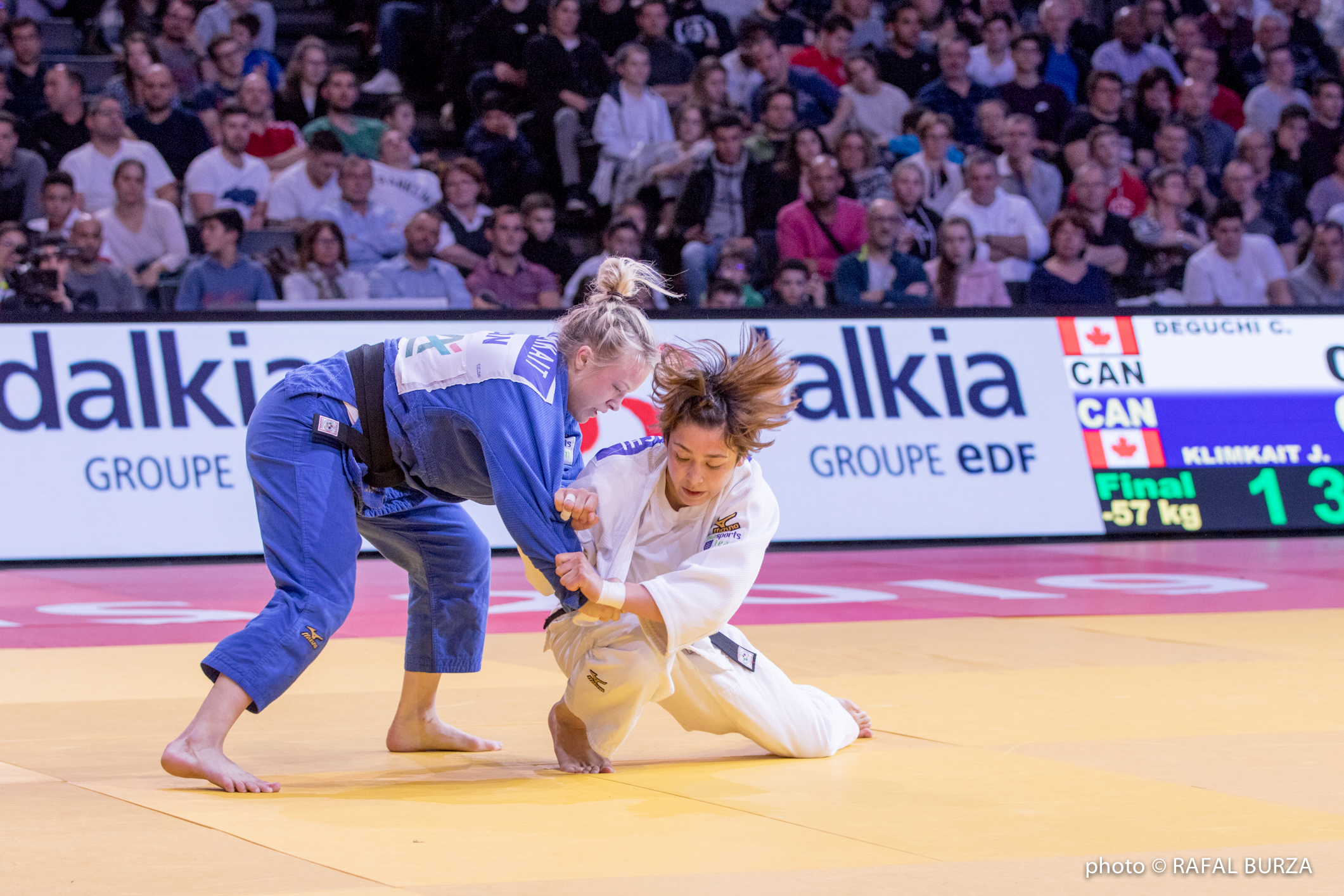 Montreal, February 9, 2019 – For the first time in Canadian judo history, two Canadians were facing each other during the final at the Paris Grand Slam. In white, Christa Deguchi, 7th on the world ranking, was trying to win a second title in -57 kg in as many years at the prestigious event. In blue, Jessica Klimkait, ranked 5th, was trying to win her first one.

Having already won three times against Klimkait in the last year, Christa Deguchi was victorious once against in the historic finale. In a close bout, the bronze medallist of the last Worlds won by waza-ari in the last seconds of the fight.

“The Paris Grand Slam is the biggest event after the World Championships and the Olympic Games, and until last year, Canada had never won a gold medal. Christa repeating her exploit to give Canada its second gold medal in history in Paris is exceptional. On top of that, having to face Jessica in the finale is definitely a historic moment for Canadian judo,” commented Nicolas Gill, the CEO and High Performance Director of Judo Canada.

Before her duel against Klimkait, Deguchi had won her first four fights by ippon. “I feel great. I didn’t want to give back my gold medal. I wanted to keep it,” said Deguchi.

“It was a hard match in the finale because it was against Jessica. She makes me stronger.” Deguchi was happy to find her momentum again after a difficult start in 2019. “I was a little nervous before Paris, because I wasn’t sure I could win. I had a lot of pressure and I wasn’t in good condition, but I tried hard. I didn’t focus on winning, but rather on doing my best, and it worked!”

Even though she’d have preferred the gold medal, Jessica Klimkait was happy to be part of the historic event. “It’s a hard loss, but it only encourages me to keep pushing forward. The match was close, but I unfortunately made a mistake that cost me the match in the last few seconds,” she admitted.

Her day will allow her to plan her 2019 season. “As this is the first tournament of the year, I wanted to be able to walk away with valuable goals that I can work on to progress my judo. There were fights where I wish I had performed better, but I was glad to have reached the finals.”

Like Christa Deguchi, Jessica Klimkait defeated all her previous opponents by ippon before reaching the finale with her teammate.

“They both had a great day today. Unfortunately, it’s hard to see them fight each other, but at the same time, it’s good for Judo Canada. They truly proved that they are dominant,” said the assistant national coach Sasha Mehmedovic. “I’m very happy and proud. They came ready and they showed up to fight and get on the podium. It’s their third final since the beginning of the Olympic qualification period and they prove that they are in the top contenders in their category.”

Catherine Beauchemin-Pinard Close to a Bronze

Fighting in -63 kg, Catherine Beauchemin-Pinard almost stood on the podium too, but she was surprised at the beginning of her bronze-medal bout.

“It’s weird, because I’m happy with the day in general, but I’m disappointed with the final. But it was a pretty good day. I won against the ones I was supposed to beat,” said the Quebecoise.

Beauchemin-Pinard lost the bronze medal fight to Japanese Nami Nabekura, who scored an ippon from the start. “I started to step back and she got me. She took advantage of my mistake,” she explained.

The Quebecoise judoka, who switched from -57 kg to -63 kg a year and a half ago, started strong with two wins by ippon before facing French and current world title holder Clarisse Agbegnenou in quarterfinals.

Beauchemin-Pinard stood firm before losing in golden score against the best-ranked judoka in the world. “Even though I lost, it was a good fight. I’m really happy,” said the Canadian, ranked 15th in the world, who then defeated French Yasmine Horlaville in repechage for a spot in the bronze-medal bout.

A new member on the team after fighting as a Junior, Jacob Valois was eliminated in the third round. “It’s a good start for Jacob and he performed well,” said the national coach, Michel Almeida.

In Follonica, in Italy, Seth Nobert nearly went through the medal round in the -60 kg category.

After one win and one loss in the preliminary rounds, the Canadian judoka won his first two bouts in repechage. He was then eliminated in the following round by Italian Mattia De Zan, who went on to win a bronze medal.

Brady Dixon was eliminated in the third round.

After winning the first round in their respective categories, Olivier Gagnon, Emil Schenk, Daniel McCristall and Nathan Demaere were eliminated in the following round. Maximus Litzenberger, Félix Archambault and Ema Tesanovic were eliminated after their first duel.

“I was pleased with how the young Canadian Cadets fought today. I know we left a few matches out there, but it’s all part of their development. We didn’t expect them to win every match; we expect them to win when they can and learn when they don’t,” said Russ Gallant, assistant coach at the Regional Training Centre in Lethbridge, Alberta.

The Cadet European Cup will continue on Sunday in Follonica.