Beauchemin-Pinard and Nemeth on the third step of the podium

Montréal, 28 juillet 2018 – Catherine Beauchemin-Pinard won the bronze medal at the Zagreb Grand Prix, in Croatia. She had an almost perfect day with a record of 4 wins and 1 loss on Saturday. 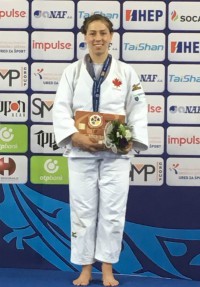 “I fought really well in most of my fights, except the one I lost, where my game plan was not quite on point,” commented Beauchemin-Pinard.

In action in the -63 kg category, the Quebec judoka inflicted ippons to her first two opponents, the American Hannah Martin and the Austrian Magdalena Krssakova. She then lost against Slovene Andreja Leski by waza-ari in the third round, which led her to the repechage where she defeated Kiyomi Watanabe, of the Philippines.

“In the fight I lost, I had trouble finding openings to project her. I made the same attack as in the bronze medal final, but my opponent countered me. I am happy, however, in the sense that I didn’t lose because she projected me, but because of an error that I made.”

In the bronze medal final, Beauchemin-Pinard took just over a minute to score an ippon, leaving her opponent, Germany’s Martyna Trajdos, in fifth place.

“My other fights all went well. I have done some great techniques and I can say that there is improvement in each of my competitions, even if there are still things to work on,” said Beauchemin-Pinard, whose main goal is to do well at the next World Championships.

“I think that what I still have to work on is to find openings in the fights where I face smaller people, who are my size. I don’t have any difficulty to do it against the taller judokas.”

In the -70 kg category, Kelita Zupancic was eliminated after her second fight, while Emily Burt was eliminated in the first round. Stéfanie Tremblay (-63 kg) also lost her first bout of the day.

On the men’s side, Arthur Margelidon made the best Canadian performance, finishing with a seventh place. In action in the -73 kg category, he won his first two bouts, beating Jordanian Eyal Salman Younis and Russian Georgii Elbakiev.

Margelidon’s victories were however followed by two defeats in a row, first against Israel’s Tohar Butbul in the third round, then against Sweden’s Tommy Macias in repechage.

In the same category, Antoine Bouchard lost his first fight. Étienne Briand (-81 kg) had a record of 1 victory and 1 loss.

Alberta judoka Virginia Nemeth was Canada’s only medalist on the opening day of the Junior European Cup presented in Berlin, Germany.

Nemeth defeated by ippon Russian Ekaterina Dolgikh in the final for third place of the -48 kg category.

In the preliminary rounds, Nemeth won her bouts against Britain’s Amy Platten and France’s Mélanie Vieu. The Albertan had her only loss of the day in the semifinals against Galiya Tynbayeva, of Kazakhstan.

“I was a lot calmer than in my last competitions. I was able to control the pace and stick to the plan, but I think I could have done better. I just had one little moment where I made a mistake in the semifinals, but it’s definitely something that I can work on,” said Nemeth.

In the -52 kg category, Taeya Koliaska placed in 9th position. Her day ended in repechage, where Belgian Amber Ryheul defeated her by ippon. In the preliminary rounds, the Albertan had 2 victories and 1 loss.

Fighting in the -73 kg category, Sava Antic won against Austria’s Gabriel Bretschneider and Britain’s Oliver Nash in the first two rounds before losing to Brazil’s Jeferson Santos Junior in the third round and Yannick Van Der Kolk, of the Netherlands, in repechage.

Joel Demaere (-60 kg) and Julien Frascadore (-66 kg) each made one victory. Demaere had two defeats while Frascadore lost only once.

Marie Besson (-52 kg) and Camélia Pitsilis (-57 kg) both had two defeats while Mitchell Markwat lost his first and only fight in the -66 kg category.

The Zagreb Grand Prix and the Junior European Cup in Berlin will both continue on Sunday.