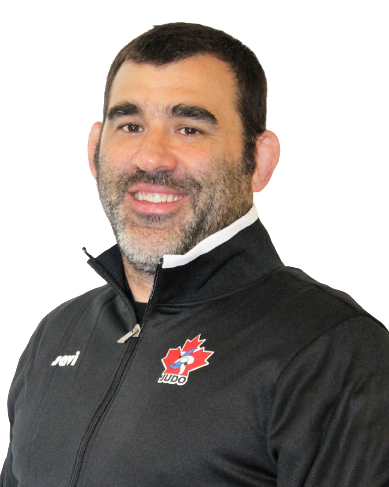 The Montreal native is the most prolific judoka in Canadian judo history, Nicolas won two Olympic medals and three World Championship medals. He competed in four Olympic Games and was the flag bearer for the Canadian delegation at the opening ceremony of the Athens Games, in 2004. After retiring as an athlete in 2005, Nicolas chose to dedicate himself to the development of high-level judokas. He has been National Team Coach starting in 2005 and performed the dual functions of High Performance Program Director for Judo Canada as well as National Team Head Coach from 2009 to 2016. Since 2016 Nicolas has taken on new challenges within the Canadian judo federation as CEO, although he continues to perform the functions of the HPD. 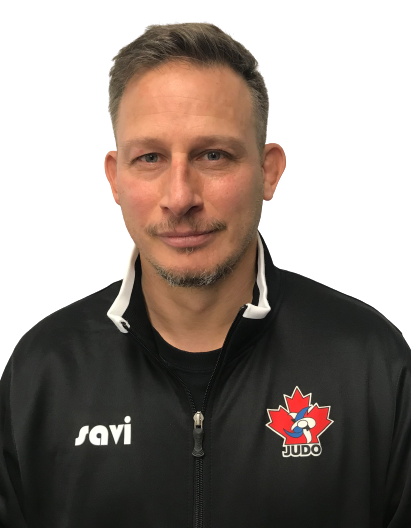 After a career as an athlete, during which he was a national team member for a few years, Patrick was involved in judo on several levels. He served as technical director and head coach of Alma Seiko Judo Club for four years and then became CEO of Judo Québec for 12 years. He is a certified dojo instructor level 3 and joined Judo Canada in 2016 after four years at the head of Soccer Québec. 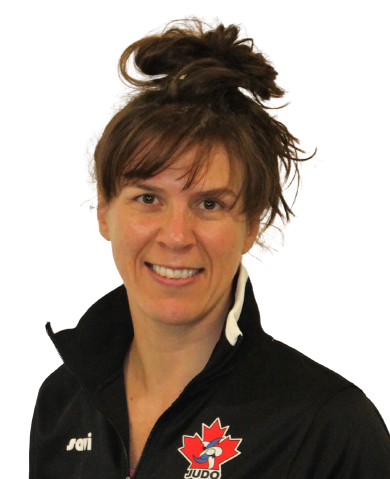 National Team member for nearly 14 years, Marie-Hélène was a very successful competitor. She placed 5th at the Athens Olympic Games, which was the best female result in the history of Canadian judo at the time. The following year she also placed 5th at the 2005 World Championships in Egypt. Marie-Hélène is a certified NCCP level 5 judo instructor. After retiring from competing, she worked at Judo Québec as a provincial coach from 2008 to 2009. She joined Judo Canada in 2009 as the Assistant Coach of the women’s national team. Marie-Hélène kept that position until 2013 and then pursued other opportunities as Judo Canada High Performance Manager. She is also the founder and the chair of the Judo Canada Gender Equity Committee. 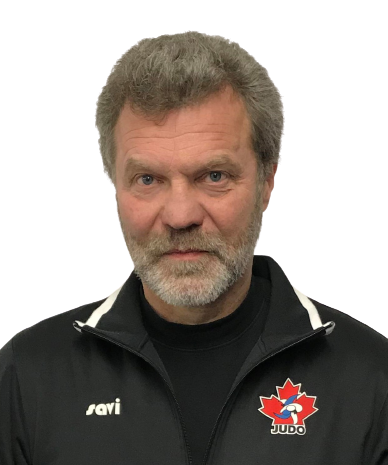 Andrzej Sadej is a former Polish national team member. Throughout his career, he was eight-time Polish national champion, won four European Championships bronze medals, and was a three-time medallist at the World University Championships. Andrzej has a Master’s degree from PE Academy, in Wrocław, Poland. He first made his mark as a national coach from 1990 to 1996, after which he decided to work in the administration of Judo Canada. In 2014, Andrzej returned to the tatami as the Paralympic Program’s national coach for the visually impaired athletes of Judo Canada, giving a new breath of life to this program. 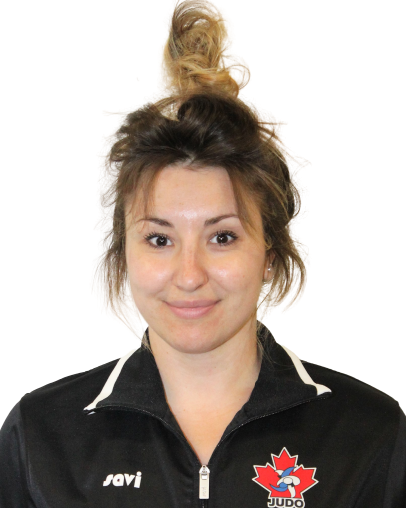 Former national team member and former national champion, Émilie-Claude has been involved in judo on several levels over the years. She is a former club instructor and a member of the Judo Canada Gender Equity Committee since 2013. She joined Judo Canada in 2015, her role with the organisation has change over the years and since December 2021 she has become the Communication Coordinator. 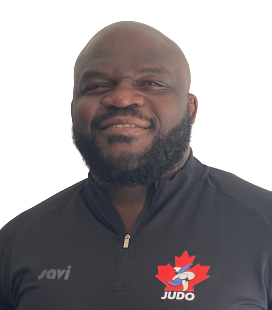 Franck is a former Cameroonian Olympic athlete (2004 and 2008), two-time African Champion and silver medalist at the University Games in 2007. He has held numerous national coaching positions in Cameroon, Swaziland and Botswana under the auspices of the IJF. He is also an IJF Academy expert since 2015 specifically in coach training and evaluation seminars. 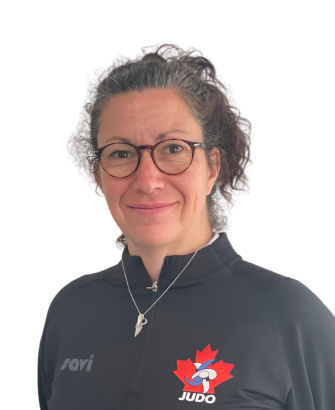 Danielle has extensive professional experience in project/program and event management. She is currently President and coach at the Vainqueurs Plus track and field club and has held this position since 2013. Danielle was a Volunteer Coordinator for a multitude of major sporting events, including the 2019 Montreal Grand Prix. She is a dedicated leader with a strong background in the Canadian sport industry, committee leadership, logistics and team management. 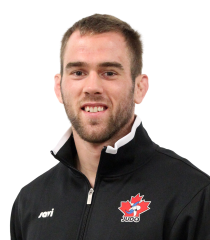 Antoine started practising judo at the age of four at the Club de judo de Beauport. His parents thought the sport would be a healthy outlet for their son’s boundless energy, but they didn’t expect it to become Antoine’s greatest passion. In 2008, Antoine moved to Montreal to train at the Shidokan Judo Club (former Judo Canada National Training Centre). It was during the 2012 London Olympic Games, where he won a bronze medal, that the world got to know Antoine’s exceptional talent. In 2014, Antoine Valois-Fortier won his first medal, silver, at the World Championships, followed by two bronze medals in 2015 and 2019. Along with his athletic career, Antoine graduated with a bachelor’s degree in Intervention in Physical Activity from the Université du Québec à Montréal and a Specialized Graduate Diploma in Sport Management from HEC Montréal. In December 2021, at 31 years old and after a remarkable career of more than 12 years on the national team, Antoine retired from competition. In January 2022 Antoine joined Judo Canada as the Senior National Coach. 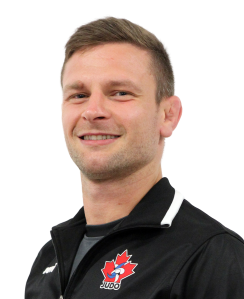 Sasha was born in Pancevo, Serbia, and came to Canada in 1993, when he was eight years old. He got into judo by following in the footsteps of his father, a judoka himself. A fan of contact sports and martial arts, Sasha chose to dedicate himself to judo as a way to pursue his Olympic dream. As a member of the national team for over 10 years, where he fought in the under 66 kg category, Sasha represented Canada at two Olympic Games in 2008 and 2012. Throughout his career, he won several medals in World Cups and Grand Prix competitions. The highlight of his career is a 7th place at the 2007 World Championships in Brazil. In September 2013, soon after retiring from competing, Sasha joined the Judo Canada coaches team. 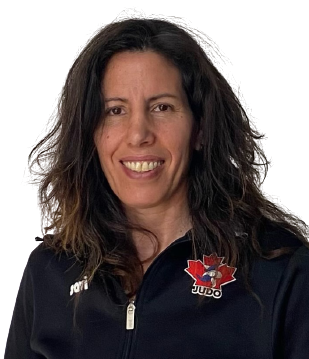 Daniela was born in Buenos Aires, Argentina and at an early age moved with her family to Israel where Daniela was introduced to Judo. Since 1999 she represented her birth country, Argentina, while competing at the highest levels. The highlight of Daniela's career came at the World Championships in Osaka in 2003 where she was crowned World Champion in the under 63 kg category. The following year she placed 5th at the Athens Olympic Games. She retired soon after winning gold at the 2009 Pan American Championships. In addition to her great experience in judo, Daniela is also specialized in teaching Krav Maga and is an Expert 2 military and civilian instructor. She developed and teaches the Judo Canada self-defence for women programme, and she is also an instructor for the IJF academy. In January 2022 Daniela relocated to Montreal to become Judo Canada U23 Assistant National coach. 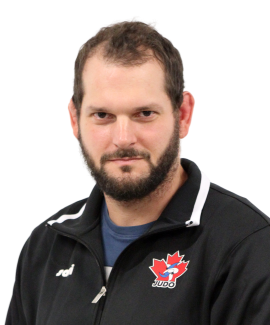 Alexandre started judo at the age of 6 at the Club de judo de Varennes. From an early age, Alexandre took part in several Canadian championships. He became a member of the national team at the age of 20 and competed in the London Olympic Games in 2012. The 2-times Pan-American Champion holds a bachelor’s degree in Intervention in Physical Activity from the Université du Québec à Montréal. Since January 2017, he has joined the national team as a coach for young athletes transitioning to the Judo Canada National Training Centre (NTC) in Montreal. His role has since evolved to oversee all young athletes training at the NTC. 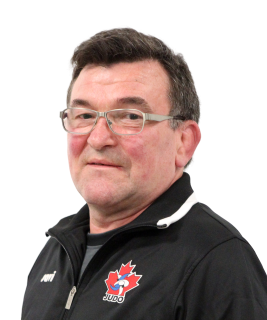 Janusz Pawlowski was born in Sopot, Poland. The former Polish national team member attained remarkable success in his judo career, fighting in the under 65 kg category. Throughout his career, he was six-time Polish national champion, won three European Championship medals, was two-time Olympic medallist and won three World Championship medals. Janusz holds a master’s degree from the Academy of Physical Education in Gdansk, Poland, with a specialization in Judo Coaching. Since 1991, Janusz has been training athletes from various backgrounds and from different countries. Janusz is also fluent in five languages. He lived in Poland, Kuwait, Slovenia, and Italy before arriving in Canada in 2014, where he holds the position of Assistant National Coach at Judo Canada National Training Centre in Montreal. 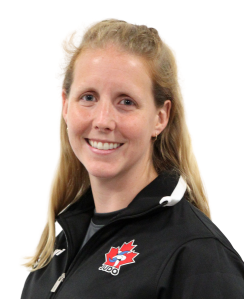 Tiffany Hunting joined Judo Canada in 2016. Previously, she was employed by the Institut national du sport du Québec (INS Québec), where she worked with the short-track speed skating team, among other sports for several years, building up extensive experience in highperformance sports physiotherapy. Tiffany holds a degree in Physiotherapy from McGill University, as well as a master’s degree in Human Nutrition. She is a registered member of the International Federation of Sports Physiotherapy (RISPT) and is also a Fellow of the Canadian Academy of Manipulative Therapy (FCAMPT). A passionate athlete herself, Tiffany has always enjoyed being involved with all types of sports and knew that she wanted to work with athletes, giving them her best, so that they can do the same in competition. For Tiffany, her job is to help the athlete reach their sports goals.