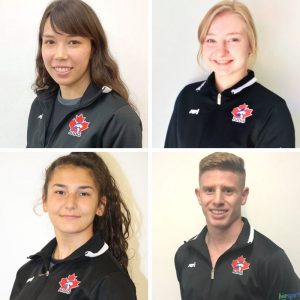 Montreal, October 17, 2019 – Four Canadians were in action on Thursday at the Junior World Championships in Marrakech. Coach Jean-Pierre Cantin believes the lack of experience was visible, but the national team members will still come out as winners after their stay in Morocco.

In -63 kg, Isabelle Harris easily won her first contest by ippon against Sudaba Aghayeva, from Azerbaidjan. She was then eliminated by Renata Zachova, from the Czech Republic, in what was a very close fight.

“Those were two good fights for Isabelle. It’s her first year as a junior and she came here without any pressure, to gain experience,” explained Jean-Pierre Cantin. The athlete from British-Columbia recently moved to Montreal to train, which should be greatly beneficial to her development in the next few years.

Fighting in the same category, Alicia Fiandor was eliminated in the first round by Lia Ludvik, from Slovenia, after getting three penalties. Having just recovered from two consecutive injuries, the Canadian only had a month of preparation, which wasn’t enough. “The level at Junior Worlds is very high and she was tentative with her attacks. She decided to come anyway, but she would have needed more training,” analyzed coach Cantin.

Kelly Taylor was eliminated in the first round in -57 kg by Mongolian Khaliunaa Munkhjargal. She started off well by scoring a waza-ari, but she made a mistake, allowing her opponent to bring her on the ground and win with an arm lock. Daniel Chosak-Barkay also had a short day in the -73 kg category. After getting a bye through the first round, Italian Mattia Prosdocimo defeated him, scoring in the last few seconds to win the bout.

“Both were good enough to advance further in the tournament, but their nerves and lack of experience made a big difference. With both athletes, little details gave their opponents the upper hand,” explained Cantin.

World Junior Judo Championships will be continuing on Friday, with three athlete representing Canada. Alexandre Arencibia and Keagan Young will be in action in -81 kg, and Benjamin Kendrick will be fighting in -90 kg.