A Day of Learning for Canadians

Montreal, October 8, 2017 – Canadian judokas Mohab El-Nahas and Danil Neyolov will be leaving the Dominican Republic with medals in their luggage! On the last day of competition at the Pan-American Open in Santo Domingo, El-Nahas earned a silver medal while Neyolov secured a bronze. 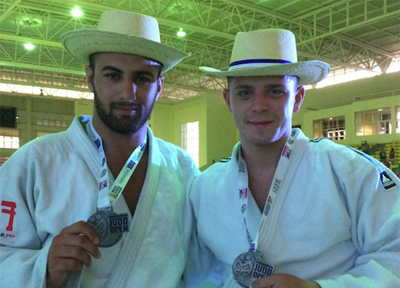 In Sunday’s -90 kg gold medal final, Ontario’s El-Nahas bowed out to Robert Florentino of the Dominican Republic, who scored an ippon after a minute and 27 seconds of combat.

“His opponent was very physical and Mohab made a strategic Kumi Kata error. He was thrown for a waza-ari and then held down on the floor. That cost him the match,” explained national team coach Jean-Pierre Cantin.

Earlier in the tournament, El-Nahas had beaten both Luis Rosario of the Dominican Republic and Matthew Koch of the U.S.A. He brought more of the same to semi-final, where his victory over Colombia’s Francisco Balanta assured him a pass to the gold medal match.

In -81 kg action, Ontarian Danil Neyolov’s defeat of American Kell Berliner earned him a spot on the third step of the podium. The 19-year-old scored two waza-aris to snag the bronze medal.

“Danil dominated the fight from start to finish. His performance was excellent,” noted Cantin.

After winning his first match against Peru’s Kengi Vidal, Neyolov was derailed by Venezuela’s Noel Pena in the second round. Nevertheless, the Canadian judoka got back on track during the repechage, where he ousted Panama’s Cesar Castillo and moved ahead to the bronze medal match.

Canada’s judokas will be heading home with a total of two medals. On Saturday, British Colombia’s Alicia Fiandor finished in fifth place in the -63 kg category while Quebec’s Gueorgui Poklitar was eliminated in the first round of -60 kg combat.