Five Canadians on the Podium in Hong Kong

Montreal, December 10, 2017 – Canada’s judokas went out in a blaze of glory on Sunday with a haul of five medals at the Asian Open in Hong Kong. Ontario’s Mohab El Nahas led the Canadian delegation by climbing to the top of the podium in the -90 kg category. Louis Krieber-Gagnon, Benjamin Kendrick, Marc Deschênes, and Joe Casey Andres were the country’s other medallists. 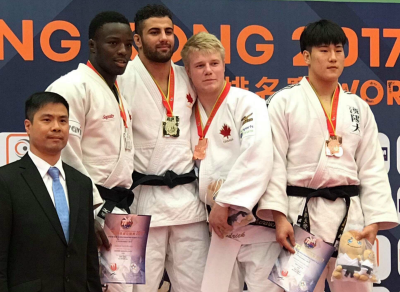 El Nahas put in a perfect performance, winning all three of his matches on his journey to the top of the podium. “It’s his first gold medal at a senior-level international tournament. He performed very strategically against all of his opponents and executed his plan perfectly,” noted his coach.

In his final match, the 21-year-old defeated his teammate Louis Krieber-Gagnon, who was awarded the silver medal.

El Nahas and Krieber-Gagnon were not the only Canadians to step onto the podium in the -90 kg group: their teammate Benjamin Kendrick, of Ontario, secured the bronze. “Ben concluded his trip to Asia by winning his first international medal. Mission accomplished!” declared Cantin.

“He trained very hard during his two-week stay in Japan. I’m not surprised by his results today,” he added. 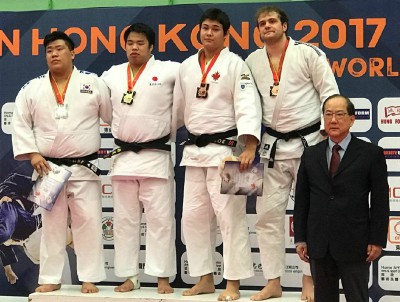 In the +100 kg weight category, Marc Deschênes of Quebec and Joe Casey Andres, now of Alberta, were awarded the two bronze medals.