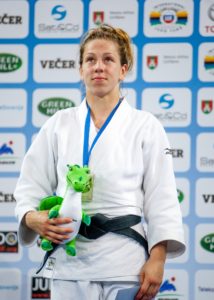 Montréal,  October 24th, 2013 – Catherine Beauchemin-Pinard became the first Canadian in 17 years to climb the podium at a Judo Junior World Championships, Thursday, when she walked away with a silver medal in the under 57 kg class in Ljubljana, Slovenia.

The last Canadian judoka to  medal at a World Junior Championships was in 1996, when British Columbian Emi Tasaka, competing in the under 48 kg division, won a silver medal in Porto, Portugal.

Since then, the 5th place finishes of Patrick Gagné (2010) and Michaël Fortin-Demers (2011), both times in the under 66 kg category, were the best results the Canadian contingent had been able to muster.

Exempted from the opening round, Thursday, Beauchemin-Pinard won her first two bouts by ippon versus the Slovenian Manja Kropf and the Cuban Yaiselis Manzano Dussac.

In the quarterfinals, the Quebecer ran into a difficult opponent in the form of Japanese judoka Christa Deguchi, but managed to come through with a win by yuko. Her semifinal tilt was even more intense, a fight that went right down to the final whistle.

The only loss Beauchemin-Pinard suffered all day was in the final, where she fell by a waza-ari to the Pole Arleta Podolak.

“I’m particularly satisfied with my win over the Japanese judoka. She was a tough opponent and I managed to win in the last minute. Besides that, I’m proud of battling through the semifinal to assure myself of a medal,” Beauchemin-Pinard explained.

“Still, I felt like I could have beaten my opponent in the finale. There was a moment in the match where I had her pinned on the ground, but I couldn’t execute my technique properly. In the end it’s a bit of a disappointment. But that’s just who I am; even when I obtain a great result, I won’t be 100% satisfied if I lost one. But still, it was a good experience for me today.”

Arthur Margelidon just misses out on the podium

In the under 73 kg class, Arthur Margelidon also had an excellent tournament, winning his first four bouts.

The Quebecer managed to eliminate both the Lithuanian Mantas Jakubavicius and the South Korean Jeonggon Lee by ippon. He then went on to beat the Russian Magomedramazan Gazaev, who pushed him to the limit, and the Brazilian Gabriel Mendes by a waza-ari.

His losses however, first in the semifinal to the Uzbek Sarvar Shomurodov followed by his bronze medal bout defeat at the hands of the Greek Roman Moustopoulos, kept the Quebecer from reaching the podium.

Antoine Bouchard, also from Québec, saw his tourney come to end after losing to the eventual silver medalist in the under 66 kg division. After taking out the Belorussian Raman Patsko with an ippon, Bouchard fell to the Japanese Sho Tateyama, losing a tough battle in overtime.

The Quebecoise Ecaterina Guica also crashed out in her second bout in the under 52 kg class. Victorious in her first contest against the Macedonian Elena Maneva by ippon, she got a taste of her own medicine in her next bout, falling to the Japanese Ai Shishime.

Finally, in the under 73 kg category, Étienne Briand, another Québec-born judoka, lost in his first bout to the Armenian Davit Nikoghosyan, a fight that went to overtime.