A Successful Canada Day in Mexico and China 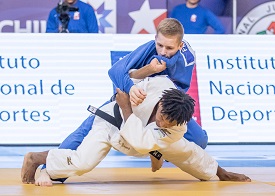 Montreal, August 10, 2017 – When Keagan Young left Canada for Chile a few days ago, he declared that he was “going to try to win a medal”. Mission accomplished! He will be coming home with a bronze medal around his neck after winning third place in the U66 kg division at the Cadet World Championships, being held in Santiago, Chile. It is the biggest tournament of his short career so far.

“I was really surprised, especially when I beat the Georgian in my second bout! It was quite a challenge. After that, everything went pretty well, all the way through to my bronze medal win!” summarized the Ontarian, who has achieved more than many others with only four years of judo experience have been able to accomplish.

On his way to the bronze medal round, Young recorded two victories, one of them against Georgia’s Mikheili Bakhbakhashvili. It was the turning point in Young’s day. Bakhbakhashvili, the 2017 cadet European champion, had not lost a single match in the past two years.

“Keagan showed great discipline all day. He stuck to the game plan without any deviations. His discipline won him the bronze medal,” explained national coach Jean-Pierre Cantin.

“In the bronze medal final, the strategy was clear. He could not let his opponent, a big right-hander, get his hand on his back. Once again, Keagan followed his instructions to the letter and scored two waza-aris for the win,” affirmed Cantin. 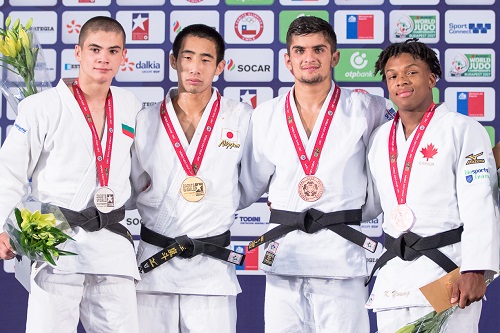 The only hitch in Young’s day was a loss to Turkey’s Bayram Kandemir. In the repechage, however, an overtime win over Italy’s Giovanni Zaraca allowed Young to move onto the bronze medal round, where he beat Russia’s Dmitrii Pridira.

Several other Canadians competed today but did not rank. Léa Roy (U48 kg) began her day with a victory but was ousted by Germany’s Mascha Ballhaus shortly thereafter. In the U52 kg division, Kiera Westlake was defeated in her first bout while Eibhleann Alexandre got a quick taste of victory before losing her second match.

On the men’s side (U60 kg) , Joel Demaere as well as his teammate Dontea De Jesus both finished with a record of one win and one loss.

The Cadet World Championships began on Wednesday with competitions in the lowest weight categories. Aidos Sapenov was the only Canadian to compete in the U55 kg division. With a record of one victory and one defeat, he was not able to rank. “It was not a bad bout. Aidos missed a few chances on the ground and came close to scoring twice, but unfortunately, it was not enough to allow him to come back,” commented Cantin following Sapenov’s last bout against Yhonice Goueffon of France.

The tournament continues tomorrow with competitions in the women’s U57 kg and U63 kg divisions and the men’s U73 kg and U81 kg groups.