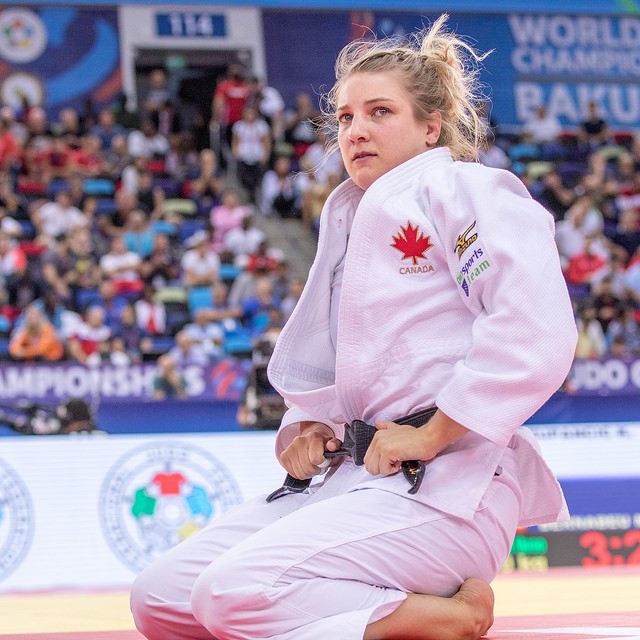 Montreal, February 10, 2019 – The only female Canadian in action on Sunday at the Paris Grand Slam, Kelita Zupancic offered a good performance. Aiming for a medal at this tournament, she had to settle for a seventh place in -70 kg.

“No medal so that’s a bit disappointing, but I’m starting to feel like myself again. I’ve been burnt out the last few months, but my spark is back,” said Zupancic.

The Ontarian judoka won her first two fights after going into golden score for both. She won by waza-ari in the first round against Italian Alixe Ballandi and by ippon in the following round against Swedish Anna Bernholm.

After burning up a lot of energy during her previous fights, Zupancic felt the fatigue and lost by ippon against Portuguese Barbara Timo in the third round, sending her into repechage.

In repechage, Zupancic pushed her opponent, French Marie-Eve Gahié, to her limits, but eventually lost by waza-ari at the end of regulation time against the current world vice-champion.

“The referees scored a point that was not a point for the French girl. She did the same technique earlier in the match and they never scored it. It definitely seemed like favoritism since I’m competing in her home country,” she said.

Assistant national coach Sasha Mehmedovic considers that his protégé had good fights during the tournament. “Kelita fought very hard today. She was aiming for the podium, but unfortunately had to settle for a 7th place finish.”

Short Day for the Men

The day was cut short for the men’s team after all the athletes were eliminated in the preliminary rounds.

Quebecois Étienne Briand had the best result, fighting his way to the third round in -81 kg. He started off strong by defeating American Ruben Martin and Azerbaijani Murad Fatiyev. Things got harder during his third bout after injuring his knee, and he eventually lost to German Dominic Ressel.

Ontarian Zachary Burt (-90 kg) and Shady El Nahas (-100 kg) both had a record of one victory and one loss. Zachary Burt defeated British Jamal Petgrave before being eliminated by Tunisian Oussama Mahmoud Snoussi, while Shady El Nahad won against Irish Benjamin Fletcher and lost against Korean Guham Cho.

“Despite a good fight against the Korean Cho, current World champion, Shady was unable to overcome him,” said his coach.

Mohab El Nahas (-90 kg) and Marc Deschênes (+100 kg) were both eliminated in the first round. They were respectively against Israeli Li Kochman and Austrian Stephan Hegyi.

“Having injured his foot last week during the Odivelas Continental Open, Mohab still took part in this event. In spite of being a small ankle sprain, this has considerably limited his performance,” explained Michel Almeida.

The best result of the day during the Cadet European Cup in Follonica, in Italy, was from Kiera Westlake with a seventh place in -57 kg.

She had a record of one victory and one loss in the preliminary rounds. She won her first two fights in repechage before being eliminated by Austrian Rosalie Woess, who then went on to win a bronze medal.

The other members of the women Canadian team, Brae Booth (-70 kg), Alexandria Lefort (-70 kg) and Jordann Warner (-63 kg), were eliminated in their first bout.

On the men’s team, Taylor Althouse (-81 kg) was eliminated after his first fight in repechage. He was defeated by waza-ari by Russian Ikhvan Edilsultanov.