Montréal, October 26th, 2013 – The judoka Kyle Reyes became the first Canadian ever to win a Junior World Championship title, Saturday, after claiming gold in the under 100 kg class in Ljubljana, Slovenia. No Canadian men’s judoka had won a medal since 1992, when Nicolas Gill came away with a silver medal in Buenos Aires, Argentina.

Reyes began his day with successive victories over the Kyrgyzstani Bolot Toktogonov, the German Marius Piepke and the Japanese Ryuko Ogawa with ippons. In the semifinal he defeated the Belgian Toma Nikiforov with a waza-ari, before going on to claim the gold medal with an ippon over the South Korean Leehyun Kim at the 2m 42s mark. 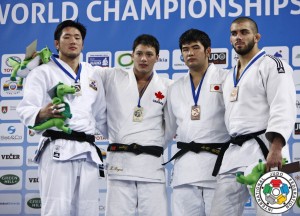 “It was really incredible to have so much support from my teammates today! I knew that Canada had never had a junior world champion, but I never thought I would be the first,” exclaimed Reyes, who has been living in Japan for a number of years. “It was my first and last Junior World Championships and I was pretty nervous, but I managed to put all that aside to have a great day.”

The Quebecoise Ana Laura Portuondo Isasi (-78 kg), who was participating in her first Junior World Championships, took home a 5th place classification. She won her first bout by waza-ari against the Slovenian Klara Apotekar, followed by two quick victories by ippon in the preliminary round over the Venezuelan Susana Melendez and the South Korean Ji Yeon Yu at 51 seconds and 1 minute 12 seconds, respectively. Earlier in the season, Portuondo Isasi came away with a 5th place finish in the Cadet World Championships.

In the semifinal, she fell to the Brazilian Samanta Soares, accumulating two penalties to her opponent’s one. She took on the Frenchwoman Madeleine Malonga in the bronze medal match, a bout she lost by ippon at the 1m 31s mark. She would eventually walk away with a 5th place classification in the under 78 kg category.

“I’m really happy,” Portuondo Isasi said. It’s my first time competing in a Junior World Championships, and I’m still learning a lot everyday. These kinds of competitions are a great way of gaining experience. On top of that, Kyle’s win made the day a historic one for Canada. Just being here and living this moment, it’s really an amazing feeling!”

The Quebecoise Sophie Vaillancourt (+ 78 kg) won her first bout against the Frenchwoman Gwendoline Le Guilloux by ippon before succumbing to defeat versus the German Carolin Weiss, also by ippon.

The Ontarian Martin Rygielski (+ 100 kg) saw his day come to end after his very first contest, losing to the Ukrainian Mykyta Dibrin.