Remember the Olympic Games in Tokyo in 1964?

Judokas return to the tatami in Alberta

22 October 1964, the Olympic Games in Tokyo take place and on this day the heavyweights start with a narrow field of 15 judoka. In that field Doug Rogers, the Canadian medal candidate.

Outside Rogers also Chikviladze of the USSR, Kiknadze also USSR, Inokuma of Japan and Kim Jong-Dal of Korea. They could all win the gold medal. The Round-Robin system matches were quite boring actually. Kiknadze had defeated Dutchman Joop Gouweleeuw in one of the spare good matches, but was opposed to Doug Rogers. Rogers faced the mad bull Chikviladze and displayed evident Judo Maturation in his Judo finesse which was so evidently lacking a year ago in his pre-Olympic appearance and decision loss to Japan’s great Shigematsu. The Russian, spurred on by his easy victory over USA’s Harris, tried to rough up Rogers, but found that Rogers doesn’t rough up easily. Behind his 275 lbs, Rogers stood nimble and quick, markedly deceptive for a man of his size. As the Russian bull charged, Rogers shot a surprise te-waza from an o-soto-gari fake, rapidly changing it into uki-otoshi with large, strong hand and body action. The high Russian came off his feet and tumbled to the mat but managed to save himself from the ippon with a desperate effort of one of his high paws like hands (this Russian bull has paws). Rogers continued his nimble tactics and avoided the mad rushes of the infuriated Russian, who as time slipped away against his favour, realized that he was behind. The Russian had been completely ineffectual against Rogers except to wear down a good bit of the Canadian’s energy, but like the great champion he is, Rogers knuckled down to business and was clearly superior in this standing and grappling exchanges. The decision went to Rogers as time expired. 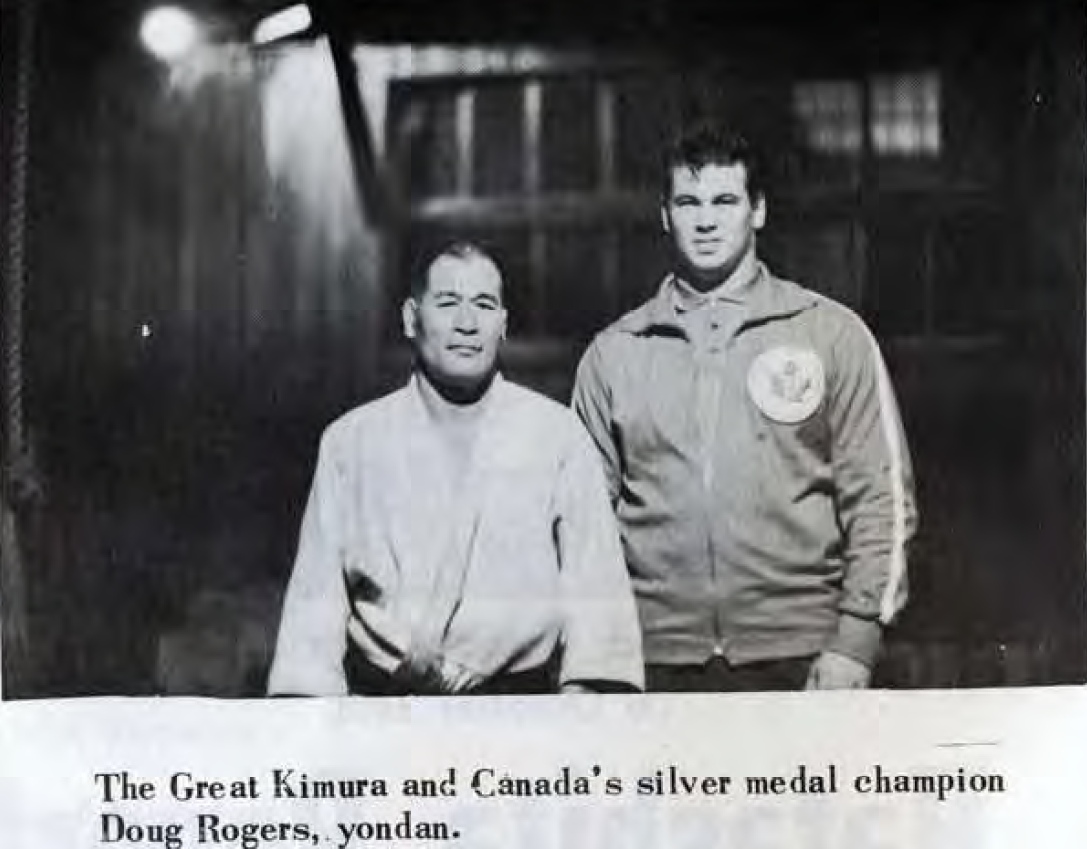 Kiknadze who had worked little in the round-robin matches made it to the semifinal. Inokuma, prize of the Kodokan met Korea’s Kim and advertised his powerful grappling skill with a picture book kuzure Kamishio-gatame as he dumped the Korean down on the mat from a too highly placed throw attempt by the Korean. Inokuma was not a bit extended, as he toyed with Kim but was apparently willing to save himself for the biggest tests yet to come. Kim surrendered in the vice-like osaekomi of Inokuma, complaining of inability to breathe.

Inokuma now faced his old foe-the Russian bear Kiknadze. Time was slipping away in the contest. Suddenly Kiknadze rose over-the-top of Inokuma with the unsuspected… not the seoi-nage, not the tai-otoshi, but a blend of both. The Russian continued his flight and landed inside of, but with his legs handing off the edge Kiknadze balanced momentarily there as the crowd’s roar deafened the ippon call of the referee, but all knew the score as Inokuma turned, got up and walked away…smiling.

With Kiknadze on the way to the showers, Inokuma faced his biggest test…. Canada’s Champion Doug Rogers. Inokuma, long a training partner of Rogers, knew that the Canadian has improved, but was mentally set realizing that Rogers lacked his experience and further, Rogers was very tired from his bout with Chikviladze. 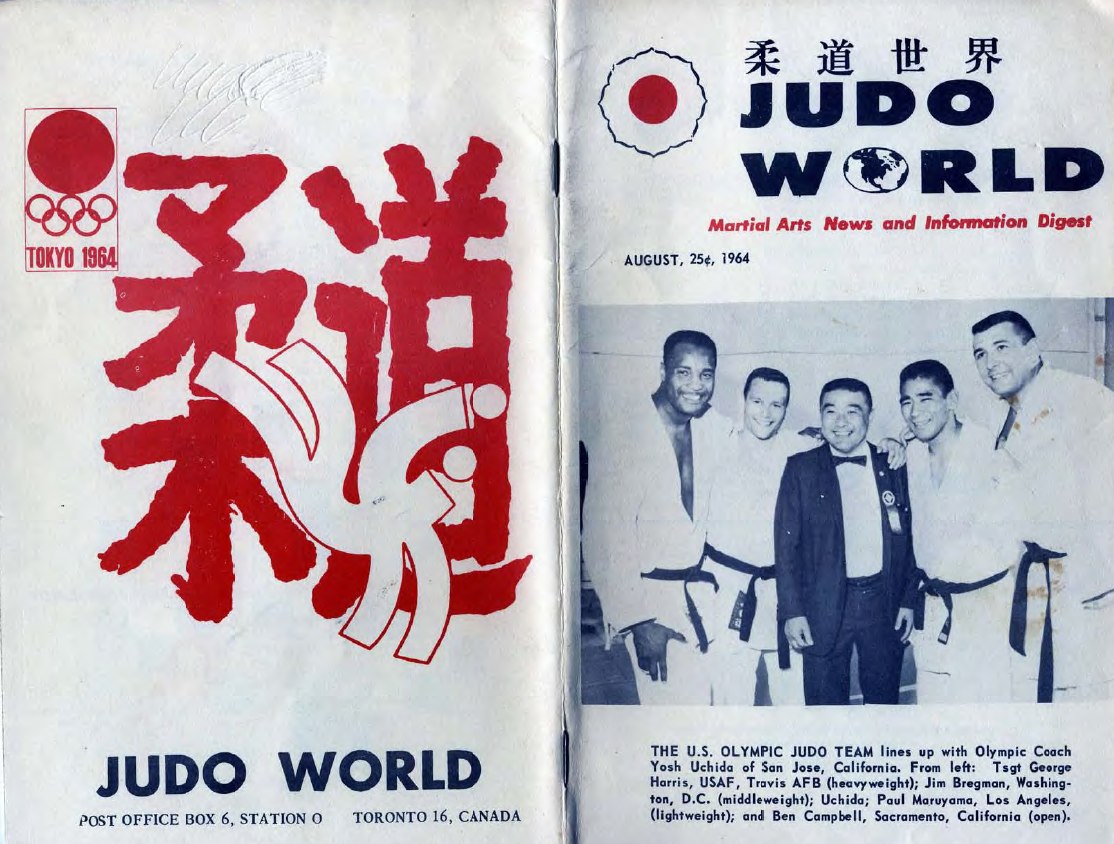 The final began. Rogers proved his mettle by disappointing the Kuma whose first cautious entries with ouchi-gari were useless. Rogers knew that Inokuma wanted to use his seoi-nage and tai-otoshi and that the ouchi-gari was only bait. Head-to-head Rogers gave away with the attack and tried his own uchimata attempts that also were useless against the rock-like defence of Inokuma. The Japanese is always aggressive and was stalking forward; Rogers was loose and deceptively supple as he worked alert for the seoinage and tai-otoshi which he knew must come. Rogers confident of being superior in katame situations where his 75-pound weight advantage would be an asset, tried valiantly to bring the Kuma to the mat to no avail. Inokuma’s tai-otoshi blasted in against Rogers….. The Canadian stepped over but was spilled outside the mat. Another tai-otoshi and Rogers toppled, turned over and was on his way…. The mat ran out and fortunately for Rogers, no score. With Inokuma seeming to have the same trouble as a beginner in ping-pong who can’t keep the ball on the table, Inokuma got Rogers somewhat defensive. Rogers made one wicked ashi-barai attempt that must have given the first row official pneumonia from its breeze, as Rogers worked the Kuma into a corner strangely reminiscent of the Kiknadze incident and got himself dumped nicely with a pure ippon-seoi-nage that only the Kuma can bring off. A bang and a crash as Rogers flirted with fate or lady luck and went off the mat again. At the bell, Inokuma was awarded a clear decision and the roof came off the Budokan. Both Judoka are extremely popular with the public and as they embraced in the manner of sporting friendship, the audience howled their approval. Inokuma thus brought Japan its third Olympic Judo gold medal, Rogers took silver for Canada, the first of five Olympic medals for Canada.