Silver for Arthur Margelidon in Japan

Montreal, December 2, 2017 – Montreal judoka Arthur Margelidon made an important career move on Saturday, nabbing the silver medal in the -73 kg category at the Tokyo Grand Slam in Japan.

“It’s another step forward. I won my first Grand Prix medal in July in Hohhot, China, so I’ve proven that I can perform well even in the biggest tournaments. This makes two major medals in one year. Now I just have to keep on winning. Slowly but surely, I’ll make my way up in the world rankings and onto the Olympic podium.” 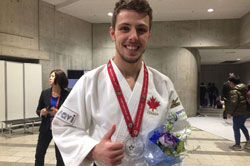 The category’s gold medal was awarded to Arata Tatsukawa of Japan. “Although I’m very happy to have won the silver medal at such a prestigious tournament, I’m a little bit disappointed because I lost what was a really, really tight match,” noted Margelidon. “It could have gone either way. I took two penalties because of one poor decision. My head ended up on the wrong side of my opponent’s arm in Golden Score.”

The Québécois’ work was cut out for him throughout the day. He overcame his first opponent, Iran’s Mohammad Mohammadi Barimanlou, by ippon.

“That was a tough match. After he scored, I managed to get him into an arm lock for the win. In my next round against Olympic champion Shohei Ono of Japan, the match didn’t take place because he had injured his knee in his previous bout. That gave me a bye to the quarter-finals. I would really have liked to test myself against him since I wasn’t able to participate in the Rio Olympics because of my broken arm. I think my chances of beating him would have been good.” 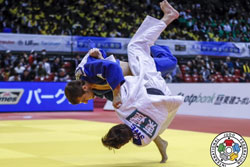 In the quarter-final, Sweden’s Tommy Macias was thrown quickly, allowing Margelidon to score an ippon. “In the semi-final, I was up against another Japanese competitor, Rentaro Nogami, who recently finished second in their nationals. I beat him by waza-ari after controlling the final 45 seconds of the match.”

Margelidon will now remain in Japan to train for the World Masters, which will be held in St. Petersburg, Russia, in two weeks. “I received confirmation that I’ll be participating in that event, which features the top 16 judokas from each category. I was selected because of my 15th place world ranking, and today’s performance clinched it. I hope to win another medal!” he concluded.

Montreal’s Ecaterina Guica placed seventh in the -52 kg group. Her day came to an end in the repechage, where she lost to Romania’s Alexandra-Larisa Florian by ippon. In the preliminaries, she recorded two victories and one defeat, all by ippon.