Silver in Overtime for Kelita Zupancic

Montreal, April 7, 2018 – After fighting to the bitter end, Kelita Zupancic will return from the Antalya Grand Prix in Turkey with a silver medal around her neck. On Saturday, Zupancic claimed the silver medal in the -70 kg weight class after having backed her Swedish opponent Anna Bernholm into a corner more than once. 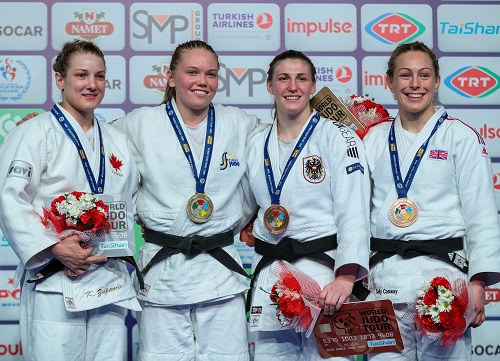 Demonstrating that both finalists were in top form, the outcome of the bout was decided shortly after the 2-minute mark in overtime. The two adversaries had each taken two penalties when Bernholm gripped Zupancic, making her fall backwards, and choked her with her right leg.

In the semi-final, Zupancic ousted Gulnoza Matniyazova of Uzbekistan by ippon. Earlier, the judoka from Whitby, Ontario had defeated Britain’s Sally Conway in the quarter-final and Turkey’s Nurcan Yilmaz in her first bout of the day.

Zupancic will be back in competition in two weeks at the Pan-American Championships in San José, Costa Rica.