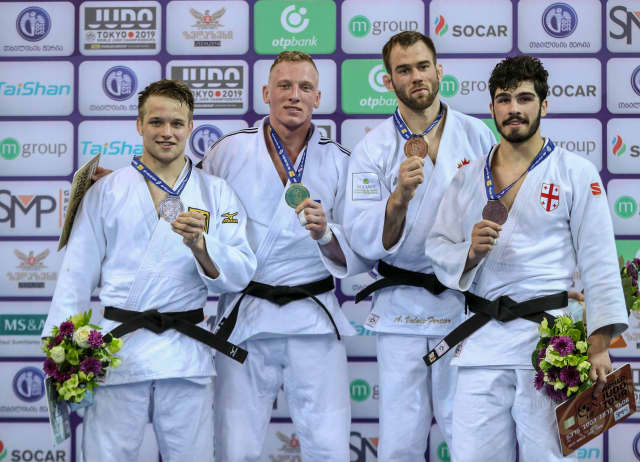 Valois-Fortier on the podium (middle right)

Montreal, March 30, 2019 – Antoine Valois-Fortier was the only Canadian in action on Saturday at the Tbilisi Grand Prix, in Georgia. To say the least, the 29-year-old judoka didn’t disappoint, winning a bronze medal in the -81 kg category, standing on the podium for the first time since coming back on the mats.

“I’m obviously very happy! It wasn’t a perfect day, but I’m satisfied with the result. I not back at the level I was before my injury yet, but I feel better every day,” said the judoka, who started competing again in February.

After receiving a bye through the first round, Valois-Fortier quickly won his first bout by ippon against Turkmen Mominjan Arzikulov.

In the third round, the Canadian won again, this time in a very close fight against Uzbek Kamoliddin Rasulov, who was finally defeated in overtime.

“I didn’t know him very well and he surprised me at first. He has an original style, and I had to adapt. Luckily, I was able to score an ippon at the beginning of the golden score and win,” he added.

In the quarterfinal, Valois-Fortier faced French Alpha Oumar Djalo in a close fight during which small mistakes mattered.

“It was another close fight until he was able to counter and throw me on the mat. I did what he expected me to and he took advantage of it. It wasn’t a right decision for me, and it cost me the match. It shows I still have work to do on the tactical side.”

The 2012 London Olympics bronze medallist came back strong in repechage, where he won by ippon against Belarusian Yunus Bekmurzaev.

Valois-Fortier concluded by facing Portugese Anri Egutidze, 13th on the world ranking, in the bronze-medal bout. The Canadian followed his game plan perfectly in a fight that lasted the entire regulation time, ending with a well-deserved podium.

“He’s very physical and explosive, so my goal was to keep a distance and tire him out as much as I could. At the end, I was able to throw him and score. I then had to stay in control until the end to win the bronze,” said Fortier.

The judoka will spend a week in Georgia to take part in a training camp. The Montrealer will be able to polish his technique in preparation for the Antalya Grand Prix (Turkey) held on April 6-7.