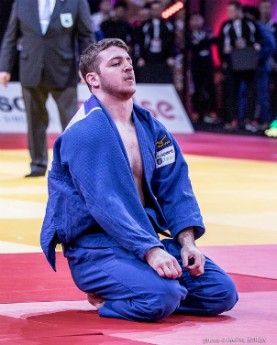 Montreal, February 24, 2019 – The only Canadian in action on Sunday at the Dusseldorf Grand Slam, in Germany, Zachary Burt was quickly eliminated in -90 kg after facing Slovak Milan Randl in the first round.

“It wasn’t a good day for me. I have lost to the Slovakian before, and this time I thought I had him figured out, but his defensive style got the better of me today and I lost on penalties,” said the Ontarian.

It was a one-way fight between the Slovakian and the Canadian, with Burt trying to attack and find the weaknesses in his opponent’s defense. Randl mostly stayed in defensive mode.

“He was only looking to counter. He ended up winning his next match the exact same way.”

It’s still difficult for Burt to evaluate his performance and know if he’s satisfied with the way he fought.

“It’s hard for me to say. I find myself thinking that there was more that I could do but I felt very unsure of how to handle his defensive style.”

The judoka will have to keep analyzing Randl’s style to find a way to win their next encounter.

“I have a few ideas and thankfully he will most likely be attending the training camp this week so I will hopefully be able to figure him out.”