Passing on the passion, one judogi at a time

Catherine Beauchemin-Pinard at the Foot of the Podium 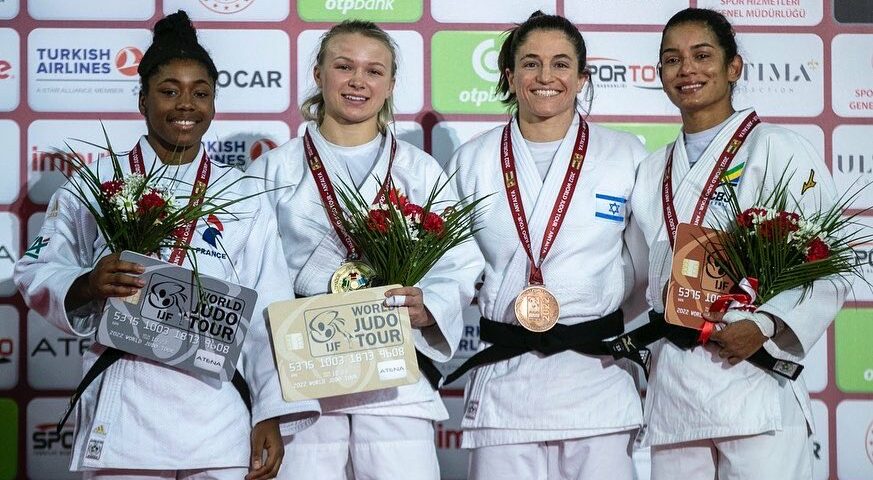 Montréal, April 1, 2022 – Reigning under-57 kg world champion Jessica Klimkait took part today in her first international competition since the Tokyo Olympic Games, where she won a bronze medal last summer. The Canadian judoka was all systems go in her comeback on Friday, putting in a flawless performance and clinching the gold medal in her category.

Coach Antoine Valois-Fortier, himself a newly retired athlete who was on the sidelines to guide his protégée at today’s event, was thrilled with Klimkait’s performance, as she ended the day with a perfect record of five wins and no losses.

“We looked at it as a sort of reboot. We wanted her to get her bearings again and see where she stood after being away from competition for so long. She proved that she’s still in great shape and that she belongs at the top of her division,” noted Valois-Fortier at the end of the day.

In the final, Klimkait faced France’s Sarah Leonie Cysique, who had deprived her of a spot in the gold medal match in Tokyo. This time, the Ontarian quickly gained the upper hand and wasted no time before scoring an ippon 30 seconds into the match, snagging her fourth career Grand Slam gold medal. According to Valois-Fortier, it was a two-fold triumph for the judoka from Whitby.

“It was the icing on the cake! Jessica and Sarah Leonie are definitely going to dominate the category for the next few years, and they are both excellent. Jessica wanted to put her Olympic loss behind her, and this she did. She should be very proud of what she accomplished today.”

Klimkait quickly made her presence felt today, easily winning her first three bouts. She bested Irem Korkmaz of Turkey before defeating Nilufar Egmaganbetova of Uzbekistan. Next, she ousted Faiza Mokdar of France to advance to the semi-final, where her match against Brazil’s Jessica Lima went into overtime. The 25-year-old Canadian ultimately won by ippon, securing her spot in the gold medal final.

“Jessica was right on track all day. It was clear that she was well-prepared, both mentally and physically. She didn’t make any errors and she came out on top,” explained Valois-Fortier.

Also in the under-57 kg weight class, Christa Deguchi had hoped to end the day with a medal as well. The tournament started well for the Albertan, who won her first three bouts. She defeated Brazil’s Rafaela Silva, Uzbekistan’s Shukurjon Aminova and Portugal’s Telma Monteiro back-to-back to advance to the semi-final.

In the semi-final, however, she came up short against Cysique, who was in excellent form today and won by ippon with 20 seconds left in regulation time.

The Canadian therefore found herself fighting for bronze against Timna Nelson Levy of Israel. In that round, Deguchi, who suffered a slight injury to her finger in overtime, received three penalties, thus conceding the victory to her opponent. She finished the day in fifth place.

“Today was also a comeback for Christa after several months away from competition. Her day started well, but it didn’t end in the way she would have liked. Still, it was a positive experience overall. It was the first day of a long, new cycle. I’m not worried. I know she’ll make the necessary adjustments,” said Valois-Fortier.

The only other Canadian in competition on Friday was Kelly Deguchi (-52 kg). She was defeated in her first bout of the day by Estrella Lopez Sheriff of Spain.

“Kelly is still gaining experience. We saw some great performances by her before the holidays. There are always adjustments to be made. There’s a training camp coming up next week, which will definitely help her prepare for the Pan-American Championships in two weeks,” concluded the coach.