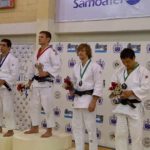 The Quebecer, 24th overall in the international rankings, easily took down the Australian Jake Young in his first match, winning by ippon. It was more of the same in the semifinals, as he made quick work of the 35th ranked American, Bradford Bolen. He then took on the Australian Ivo Dos Santos (20th) in the final, where he would win the gold by way of a waza-ari.

“It was a flawless performance by Sasha. He won all three of his bouts with ease. This tournament gives him a big helping hand in his quest for an Olympic selection, but it’s going to be a dogfight between him and Michal Popiel right up until the end,” coach Nicolas Gill explained.

Things went a bit less smoothly for the other Canadian judokas in action on Saturday, as Marylise Lévesque and Stéfanie Tremblay would miss out on the podium.

In the under 78 kg division, Lévesque started well with a victory by ippon over the Australian Isabelle Kopecny. The tables were turned in the very next round, however, as she herself would lose by ippon, here to the Portuguese Yahima Ramirez. Her bronze medal bout would have an identical outcome, another loss by ippon, this time to the Chinese Zhehui Zhang. The Quebecoise would finish her day in 5th spot.

Tremblay, fighting in the under 63 kg class, took care of her first round opponent, the Australian Samantha Revell, winning by an ippon. Things went off track from then on, however, as she would lose her next two bouts, both by ippon. After losing her second match to the Slovenian Vlora Bedeti, she would fair no better in the L Bracket, falling to the American Christal Ransom. She would end her tournament with a 7th place classification.

The end of next week will feature many Canadians in action at the Amsterdam Grand Prix, in the Netherlands.