“A Special Medal for Me” – Antoine Valois-Fortier 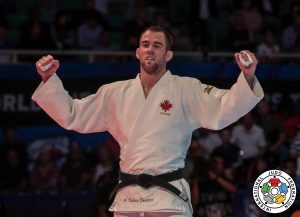 Montreal, August 28, 2019 – Antoine Valois-Fortier was patient and relentless on Wednesday to win his bronze medal in -81 kg at the World Judo Championships in Tokyo, in Japan. The Quebecois had to fight a total of seven bouts before enjoying his third World Championship podium, a very special moment for him.

“The day started early and ended late!” said Valois-Fortier after the tournament, which concludes a season full of emotions. “It’s one of the first times in my career where I’m so happy about a bronze medal. A year ago, I had to wear a corset and I wasn’t sure about my future. With a lot of patience and efforts, I was able to come back, and that’s why this medal is so special for me.”

The Canadian was facing Egyptian Mohamed Abdelaal in the bronze-medal contest. After scoring early in the fight, Valois-Fortier followed his game plan to take away the victory at the end of the 4-minute regulation time.

“I was able to score a waza-ari early on, and then, I was in control of the match. Today (Wednesday) I was patient and I stayed in the moment. That’s my strength, and that’s how I won the bronze medal,” added the athlete, who had defeated German Dominic Ressel in the first round of repechage.

His only loss of the day happened in the fifth round of preliminaries, when Iranian Saeid Mollael, ranked first in the world, defeated him. After four victories in a row, Valois-Fortier lost by ippon at the end of a fight he thinks he could have won.

“I was a little bit disappointed after the fight. I had defeated him in Croatia a few weeks ago, and I know I could have done it again. He surprised me with several different sequences and he got me to score an ippon. It’s a mistake that might have cost me the first or second place, but it was still a very positive day.”

Also in Tokyo with the Canadian team, the CEO and high performance director of Judo Canada, Nicolas Gill, praised the good work of Valois-Fortier.

“He has an exceptional career, but I think today (Wednesday) was one of his best performances ever. With the draw, he had to have a near-perfect day to stand on the podium, and he delivered the goods,” he commented on the athlete, who has been very impressive since he got back to competition last February.

“It’s very encouraging for him, especially after his injury! He is resilient and shows a great progression since he got back. His medal earns him points for his Tokyo qualification; things are looking good for him.”

Briand Can’t Get Past Third Round

Also fighting in -81 kg, Étienne Briand saw his day cut short after his third fight. He was defeated in overtime by his teammate’s victim, the eventual fifth place, Mohamed Abdelaal.

Despite this setback, Gill was satisfied with Briand, who defeated Mexican Jesus Torres and Brazilian Eduardo Yudy Santos earlier in the preliminaries.

“Étienne still had a good day,” he commented. “He had a nice victory against the Brazilian, who had defeated him a few times in the past. I think he could have won his last bout. It was very close, even in overtime, but his third shido for non-combativity ended the contest. These were the best World Championships of his career, and he can build on that.”

Catherine Beauchemin-Pinard was eliminated in the first round in -63 kg. The Quebecoise was defeated in the last minute of her bout against the eventual seventh place, Mongolian Gankhaich Bold, despite minor injuries that bothered her during her preparation for the tournament.

“We knew it wouldn’t be an easy fight. It was within reach, but she couldn’t score. She was slowed down by injuries in the last few weeks, and she wasn’t at her top physical performance. She is still in a good place for her Olympic qualification and she’ll have to keep working hard in the next year to get there,” he added.

On Thursday, Kelita Zupancic (-70 kg) and Zachary Burt (-90 kg) will be in action. Both athletes will try to win a third medal for Canada.