Montréal, November 12, 2011 – Joliane Melançon came away with the gold medal in the under 57 kg class, while Antoine Valois-Fortier took home silver in the 81 kg category, Friday, at the Judo World Cup presented in Apia, Samoa. 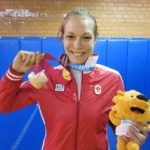 Melançon made quick work of her competition, winning all three of her fights by way of ippon. She beat the Brit Connie Ramsay, the Chinese Yang Liu and then finally the Australian Carli Renzi in successive order.

Valois-Fortier also won his first three fights by ippon, before succumbing to defeat in the final. After laying down the law against the Australian Brendan Almeida, Mongol Uuganbaatar Otgonbaatar and Chinese Rijigawa Si, his run came to a screeching halt versus the Slovenian Aljaz Sedej, who stopped him with an ippon of his own.

Plying their trade in the heart of the Pacific Ocean, the two Quebecois judokas accomplished an important task, Friday. “It was a very good tournament for Joliane and Antoine, as they both amassed precious points for their impending Olympic selection,” national coach Nicolas Gill explained.

“It was a very important tourney for Joliane because she was fighting against the same opponents who she’s battling an Olympic spot for. The Spaniards, Australians, Chinese and Mongols are all in the running for the Games,” Gill pointed out.

Two other athletes from Quebec were in action Friday night: Kalem Kachur in the 81 kg category and Guillaume Perrault in the under 90 kg division.

Unfortunately, both judokas lost their respective first bouts, Kachur versus the Brit Thomas Davis by yuko, and Perrault to the Swiss Dominique Hischier, who scored an ippon.

Saturday night, the Canadians Marylise Lévesque (78 kg), Stéfanie Tremblay (63 kg) and Sasha Mehmedovic (66 kg) will all be in action, as the competition continues in Samoa, a small country located amongst the Polynesian islands.