Montréal, November 4, 2011 – Michael Fortin-Demers stood out, Friday, during day two of competition at the junior world championships taking place in Cape Town, South Africa. The Quebecer finished with a record of four wins and two losses in the under 66 kg category, garnering him a 5th place classification. 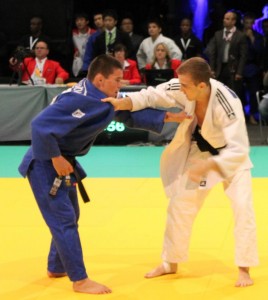 “Michael had a fantastic day.  He lost his fight for the bronze medal due to an additional penalty that, in my opinion, he didn’t really deserve,” Canadian coach Marie-Hélène Chisholm pointed out.

Fortin-Demers started his competition in fine form, winning three straight bouts in the main table. After getting the better of the Botswana Ahmael Thaga, South African Leroy Davids and the German Maxim Shitov, the Quebecer finally succumbed by way of ippon to the Russian Magomed Akhamarov in the quarterfinals.

In the L bracket, Fortin-Demers got off to a good start by disposing of the Kazakh Yertugan Torenov, but would come up short in the bronze medal bout against the Korean judoka Dongkyo Lee.

“I prepared all year long for this very competition and my objective was to win a medal. The level of competition was pretty high and I know that a 5th place finish at the worlds is a good result.  I took out some big names and was able to string together some good performances, but it still stings a bit that I wasn’t able to come away with a medal,” Fortin-Demers confided.

As for the other Canadians in action, their days ended much quicker.  In the under 57 kg class, Ontarian Nicole Jenicek was able to win her first bout by ippon versus the Australian Angela Vasic, but fell in the second round to the Romanian Lorenada Ohai.

As for New Brunswicker Vanessa St-Pierre (52 kg), Quebecer Arthur Margelidon (73 kg), and Ontarian Derek Langlois  (73 kg), none were able to win their respective first round bouts.  Like Jenicek, all three judokas were in their first go-round at the junior world championships.

Saturday, the Quebecers Catherine Beauchemin-Pinard (63 kg), Marie-Ève DeVillers-Matte (70 kg) and Marc Deschênes (90 kg), as well as the British Columbian Brandon Jobb (81 kg) will all be in action.