Montreal, September 2, 2018 – Canada won 4 more medals on Sunday at the Judo Pan American Open in Santo Domingo, in the Dominican Republic. Another medal, won at the Bratislava European Cup, was added to the medal count.

Shady El Nahas was crowned champion in -100 kg after a perfect day. He first defeated Dominicans Jesse De Leon De La Cruz and Jose Nova Alcantra by ippon. He also won by ippon against Lewis Medina, also from the Dominican Republic, in the finale.

“I didn’t feel very good this morning. I think it’s because of the food. Jean-Pierre motivated me, and helped me push through the day to finish with an ippon. He told me it was a good preparation for Junior World Championships, and he was talking about our strategy. He gave me tips to apply the JP technique,” explained El Nahas.

The Canadian judokas had already seen his opponents in training. 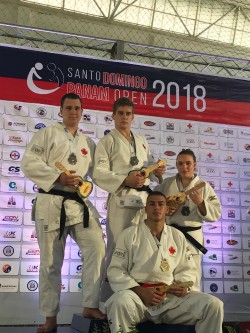 “I was up against the Dominican team. They came to train in Montreal in the past, so I knew what I had to do,” he added.

In -81 kg, François Gauthier-Drapeau was the runner-up. After winning three bouts in the preliminary round, and the semi-final against American Arthur Wright, he was defeated by ippon in the finale by Dominican Medickson Del Orbe Cortorreal.

“My goal was to win, so the finale was a little heart-breaking. I was up against a guy I know very well. I didn’t fight well, I made tactical mistakes. I’ll have to work on that,” he said.

Fighting in the same category, Alex Marineau was defeated in his second bout in the preliminaries. In repechage, he couldn’t gain the upper hand against Peruvian Luis Angeles Sotelo, who won by ippon.

Kevin Gauthier (+100 kg) won the bronze medal after defeating Dominican Luis Santana by ippon. The tournament was his first after a 14-month forced rest. A knee injury was keeping him off the mat since July 2017.

“All I wanted was to come here and fight as much as I could. Being on the podium is a bonus. I’m really happy, because my knee is okay, and I wasn’t scared to hurt myself while fighting. That’s what worried me the most, to hold back because I was scared,” he commented.

In -70 kg, Shiane Gronen was also on the third step of the podium. She was defeated in the preliminaries and went through repechage, where she won by ippon against Mexican Leslie Villarreal, then against Jessica Gallegos, also from Mexico.

“Shiane had a challenging first fight. I think she could have won, but her lack of experience showed. We were able to fix the strategy, and she started to win,” commented Jean-Pierre Cantin, the Canadian team coach.

“I’m happy with the results of the tournament. We came here with the best juniors for a last tournament in preparation for the Junior Worlds, and we did what we came for. There are still 6 weeks before the Bahamas, so now we’ll refine our strategies to be ready,” he added.

Bronze at the European Cup

At the Bratislava European Cup, in Slovakia, Canadian Mohab El Nahas won the bronze medal in the -90 kg category.

He won three bouts in the preliminary rounds, but he was eliminated from the gold-medal path when he lost his semi-final fight by ippon against Georgian Beka Gviniashvili.

He then won by ippon against Egyptian Hatem Abd El Akher in one of the bronze-medal fights.

In +100 kg, Michael Guerault was defeated in his first bout, against French Luka Lomidze, who quickly won by scoring an ippon.