The 2018 Senior and Team World Championships will be hosted in Baku, in Azerbaijan, from September 20 to September 27. Over 700 judokas from 120 countries will be competing to bring home one of the 14 world titles up for grabs. Canada will be represented by 13 of our top-ranked athletes, all familiar faces on the world circuit, and on the podiums. On top of being a great occasion to showcase their talent, this tournament is part of the Olympic qualification process that will determine the members of the 2020 Olympic team.

Nicolas Gill, CEO of Judo Canada, expects good results from the national team: “Last year, the results were a little disappointing, despite a 5th place in the team tournament. Since the beginning of 2018, our athletes had a lot of success in major tournaments, which allows us to believe that we could win at least 2 medals in Baku. The draw obviously has an impact on the results, but we’re going there feeling confident.”

Before leaving for Baku, the senior national team will be gathered for national training camp at the Judo Canada National Training Center in Montreal from August 13 to August 31. Media interested in meeting the athletes before their departure will be able to do so during that camp.

A live stream will be available. For more information on the competition, you can visit the IJF official website at https://www.ijf.org/competition/1591. 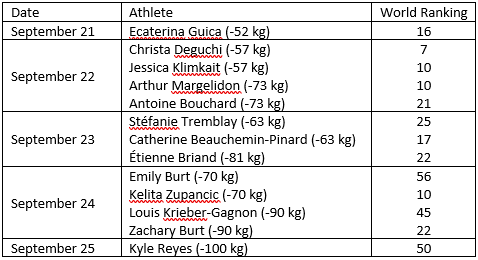