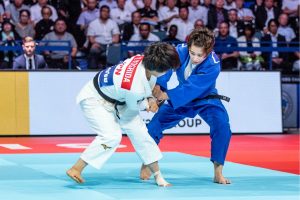 Montreal, August 27, 2019 – The third day of the World Judo Championships held in Tokyo, in Japan, was like a fairy tale for Canadian judoka Christa Deguchi, crowned world champion in -57 kg.

On top of earning the prestigious title for the first time in her career, Deguchi did it in her native country. Deguchi grew up in Nagano, less than 300 kilometres away from the Japanese capital. It was also a first gold medal in Senior World Championships in Canadian history, making the athlete even prouder.

“I can’t believe I won! I was surprised and happy, and then extremely proud to win Canada’s first gold medal,” said Deguchi, who’s been representing Canada since 2017 and whose father is from Winnipeg. “I wasn’t sure I’d be powerful enough to win Worlds, but I think I’ve proven I have everything it takes to be on top,” she added, exhausted from her performance.

A scenario worthy of a Hollywood movie happened in the finale, when the Canadian faced Japanese Tsukasa Yoshida, number 1 on the world ranking and defending champion, who had eliminated Deguchi in the semifinal in 2018. “I took my revenge! We are the same age and we grew up together. I’ve known her since I was 15, so I know her very well.” 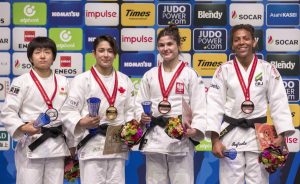 The bout ended in overtime, when Christa Deguchi managed to defeat her opponent by waza-ari, making history at the same time. “It was a really difficult fight. I think I could have done better today (Tuesday) and my technique wasn’t good enough. My mental strength made all the difference,” she admitted.

A packed crowd attended the spectacular final and Christa Deguchi was very impressed by the reception of the crowd. “I never thought it could get so noisy, and I was surprised to see the fans cheering for me. When I stepped on the podium, I didn’t think the Japanese would be so happy for me,” commented the 23-year-old.

After getting a bye through in the first round, Deguchi won all her fights by ippon, against Russian Anastasiia Konkina, Serbian Jovana Rogic and French Sarah Leonie Cysique, to win the C pool. The new -57 kg queen then defeated Bulgarian Ivelina Ilieva, also by ippon, to reach the finale.

Her experience in Tokyo is giving her a taste of the Olympic Games, Christa Deguchi’s next goal. “I can now fully prepare for the Games, knowing how the crowd will be towards me. To win a gold medal today (Tuesday) shows it’s a possibility for me to do it again at the Olympic Games.”

Also fighting in this category, Ontarian Jessica Klimkait was eliminated after her first bout against Russian Daria Mezhetskaia.

On the men’s team, Constantin Gabun and Arthur Margelidon both were in action in the -73 kg category.

Gabun, who was competing in his first World Championships, came as a surprise by ranking in ninth place. He won his first bout by ippon, against Samoan William Tai Tin, then defeated Polish Wiktor Mrowczynski, also by ippon, in the next round. The Canadian was eliminated when he was defeated by Azerbaijani Rustam Orujov, number 1 on the world ranking and eventual silver medallist.

“He really impressed people and gave an excellent performance in Tokyo. He almost surprised Rustam Orujov to win the bout,” commented Patrick Esparbès from Judo Canada. “Constantin Gabun is a name to remember for the future of judo in Canada.”

Arthur Margelidon received a bye through the first round before facing Chinese Daga Qing. The Quebecois won by waza-ari and then through the next round, where Russian Denis Iartsev eliminated him.