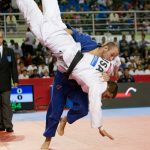 Tritton started the day off in grand fashion, easily defeating the South Korean Joo-Jin Kim. “Kim normally fights in the 66 kg category, but is considered one the best. The bout ended up being much easier than Nicholas expected. He won by ippon after just one minute of fighting,” coach Nicolas Gill explained.

Tritton’s bout versus the Belgian Dirk Van Ticheit, who currently sits tenth in the International Judo Federation, was much closer. The Quebecois judoka would eventually lose in extra time by way of a shido.

Elsewhere, Antoine Valois-Fortier and Kalem Kachur both ended their day in 17th place, in the under 81 kg division.

Valois-Fortier won his first bout by ippon against the Hungarian Szabolcs Krizsan, before falling by the same fate to the German Sven Maresh, 11th ranked judoka in the world.

Kachur’s competition ended in similar fashion. After getting off to a good start with a win against the Hungarian Sandor Nagylolymosi, Kachur would eventually fall by way of ippon to the Moldovan Sergiu Toma, 13th in the world in the under 81 kg category.

As for Alexandre Émond, his day was cut short after an early elimination in the under 90 kg class. He lost his first round match to the South Korean Dae-Nam Song, who scored two ippons after just two minutes.

Sunday, Kelita Zupancic (-70 kg), Marylise Lévesque (-78 kg) and Amy Cotton (-78 kg) will all be in action for the Canadian contingent.