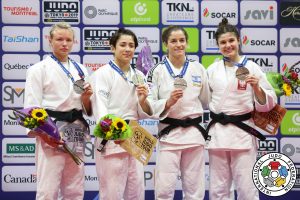 Montreal, July 5, 2019 – Canada has two of the best -57 kg athletes in the world and they both medalled on the first day of the Montreal Grand Prix, on Friday. In the gold-medal finale, Albertan Christa Deguchi defeated Ontarian Jessica Klimkait.

After an intense start, where both the opponents stayed on their feet for a while before fighting on the ground, Deguchi finally had the upper hand on Klimkait with a stranglehold and won by ippon with a little less than 2 min 30 left on the clock.

“I’m proud of me, because it’s the first edition of the Montreal Grand Prix. I didn’t do exactly what I wanted to do, but I did my best,” said the gold medallist, delighted by the support of the crowd for each of her fights.

“It’s our fifth time against each other and she (Klimkait) is getting better every time. She’s very good and quick to grip, so I had to be ready for it. I saw an opening on her neck and did what I had to do.”

Klimkait was very disappointed to see the gold medal slip through her fingers, but she can bounce back quickly.

“I had a different approach and I’m not happy with the result. Certain things did work, but I didn’t improve like I wanted to. I’ve had better fights against her. I learned the hard way. It’s harder to swallow because it’s in Canada, and I know I could have won. It doesn’t change anything to my goal of winning a medal at the World Championships.” 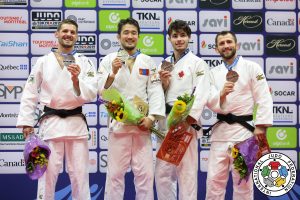 Jacob Valois also stood out in -66 kg by winning the first Grand Prix medal in his career, a bronze medal. With a spectacular throw of his opponent, Australian Nathan Katz, the Quebecois scored a waza-ari and kept his lead for 40 seconds until the end of regulation time.

“I’m really, really happy! It was a difficult fight, but I’m going to another Grand Prix next week, and it represents a lot of points for the Olympic selection. What happened tonight was really special!” he added right after his fight, still out of breath, adding he wasn’t expecting to stand on the podium on Friday.

To celebrate his victory, the Boucherville native kissed the embroidered maple leaf on his judogi before jumping into the arms of his coach Jean-Pierre Cantin.

“It was beautiful. To win my first medal in front of my friends and family is truly magical!” added the medallist, who had defeated his teammate Julien Frascadore by ippon in repechage.

Coach Cantin see this performance as a boost in the career of his protégé.

“With the third place he won at the Pan American Championships (last spring), the door for the Olympic Games was unlocked. Today, it opened and we got a foot in it! We can dream! A year ago, we would have never thought this would happen, and his progression is very steady. This result brings him to another level.”

The action will continue on Saturday at the Maurice-Richard Arena with the women’s -63 kg and -70 kg categories, and the men’s -73 kg and -81 kg.