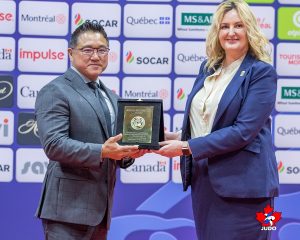 Montreal, July 9, 2019 – Judo is becoming less of a men’s game. Sunday, during the Montreal Grand Prix men’s +100 kg finale, a woman was refereeing the duel of French Teddy Riner and Japanese Hisayochi Harasawa. British Dr. Lisa Allan is an important female figure in judo as the Competition Manager of the International Judo Federation (IJF).

She was introduced to the sport by her father, who was coaching the British team. While she coached and volunteered during her studies in organic chemistry, sport was a bit left behind after she completed her PhD. However, her love of judo was still alive, and the nomination of London to host the Olympic and Paralympic Games while she was at a professional crossroad changed her fate.

She submitted her résumé to the organizing committee, not believing she would get the job, but she was chosen as the Competition Manager. Her days in the lab were over, she was back on the tatamis!

“After the Games, I was looking for a job, and the President of the International Judo Federation, Marius Vizer, offered me a job within his organization. I worked at the secretary of the Sport Commission for about nine months before being appointed as the Competition Manager, and in 2017 I joined the Executive Committee.”

The Scotland native, first women to sit on the Executive Committee, is in a good position to judge the expertise of the organizing committee, who hosted a tournament that met the expectations of the international federation.

“It’s been really amazing! The leaders of the local organizing committee, President of Judo Canada Mike Tamura and CEO and High Performance Director Nicolas Gill know judo and know it at the high-performance level,” she said. “They’ve been athletes, coaches and managers, and they’ve been to maybe 90% of these events around the world in these roles. They were starting from a very good position when they launched the project.”

In the high spheres and on the mats, women will keep playing an important part. She says the process is already underway.

“Judo is quite unique, because men and women can referee male and female competitions. It’s not new, but now there are more high-level female referees. Female judo only became an Olympic sport in 1992. It’s nobody’s fault, and we’re not blaming anybody. That’s how it was. Going forward now, we need to make sure that all judo opportunities are available for everybody, regardless of their gender.”

Dr. Allan enjoyed her stay in Montreal for the competition at the Arena Maurice-Richard, the city and her daily jogging on Mount Royal.

“It’s my third time in Montreal, and I love the city! I haven’t been here during winter, but I’d be curious to see it. The organization was excellent, you have good technical officials, and the volunteers have been amazing. The crowd is cheering for everyone, and it’s pretty special, because you don’t get that everywhere in the world. All the small details make the difference between a good event and a great event,” said Dr. Allan, who gave part of her speech in French during the opening ceremony.

Montreal is a candidate city to host the Cadet World Championship in 2021, so the metropolis might welcome the world of judo once again.