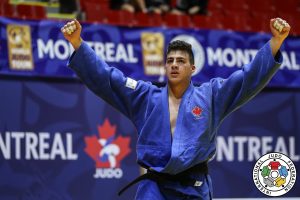 Montreal, July 7, 2019 – While being only 21 years old, Ontarian Shady El Nahas continued his explosive rise on the international scene on Sunday on the last day of the Montreal Judo Grand Prix. The rising star of the Canadian team won a silver medal in the -100 kg category. El Nahas was joined on the podium by his teammate Kyle Reyes, one of the bronze medallists.

Against the experienced Ramadan Darwish from Egypt, ranked seventh in the world, the young Canadian was surprised with an ippon at the last minute.

“I tried to attack, but I wasn’t in a good position, and I should have been more patient. I’m happy with my day, because I defeated a World champion (2015) from Japan with a great ippon, so it was a good day until the finale. I was disappointed, but that’s life! I need more experience and more strength,” commented El Nahas, who won a silver and a bronze medal in Grand Slam in the last few months.

The Ontarian had to work hard to reach the finale and faced several high-calibre opponents on the way. In the semifinal, against 2015 German vice-Worlds champion Karl-Richard Frey, the Canadian won with a spectacular ippon, throwing the German and bringing the crowd to their feet.

“It’s a feeling I’d never felt in my life. It gives an incredible energy when the crowd say your name! I’ve been on the Olympic pathway for less than a year, and I’ve won three medals. It’s a lot of pressure, because I’m missing a year, but it’s also very exciting! I always knew my place was with the bests in the world, if not the best. I’ll keep saying it until I win an Olympic medal.”

Frey faced another Canadian in the bronze medal finale, Kyle Reyes, who won in overtime.

“I wanted to throw him and do my own judo. It went well. It was easy to read his intention, so I could adapt my style to his. It’s really cool when everyone is cheering for you!” he added.

In one of the bronze medal finales in -90 kg, Ontarian Mohab El Nahas, Shady’s brother, was stronger in the second half of the fight, but it wasn’t enough to defeat Slovak Milan Randl. El Nahas tried to execute a technique he started practising recently and got caught on the ground.

“I made the mistake of waiting in the beginning. After he scored, I stepped it up and I thought I could win. He got me this time, but it won’t happen next time. It was a good fight, he was stronger this time, but I’ll train harder!” said the athlete, who defeated his teammate Louis Krieber-Gagnon in repechage.

All the Canadian women in action in -78 kg and +78 kg were defeated at their first bout and didn’t get a ranking.

Canada ends the first edition of the Montreal Grand Prix with a total of nine medals: one gold, four silver and four bronze.