Priscilla Gagné on the second step of the podium 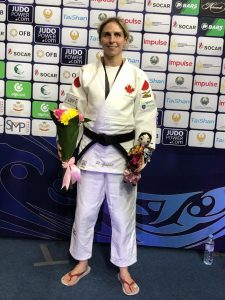 Montreal, September 23, 2019 – Priscilla Gagné will be leaving Uzbekistan with a silver medal around her neck after her performance at the Tashkent Parajudo Grand Prix. On Monday, Gagné made her way to the finale in the -52 kg category, where she faced Ukrainian Inna Cherniak. The latter defeated the Canadian by ippon, leaving her in second place.

In the semi-final, Gagné had defeated Uzbek Sevinch Salaeva by ippon. In her first contest, the Montrealer won by waza-ari against Russian Alesia Stepaniuk after 4 minutes.

It’s a second silver medal in two months for the athlete, who had also placed second at the Lima Para Pan American Games in August.

The other Canadian in action at the Grand Prix, Justin Karn (-60 kg), was defeated in his first bout. The Guelph native was defeated by Russian Zaur Dzhabrailov.