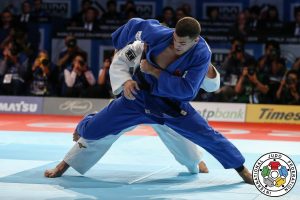 Montreal, August 30, 2019 – Judoka Shady El Nahas offered a good performance on Friday for his first-ever Senior World Championships in Tokyo. With three victories in five bouts, the Canadian ranked in seventh place in the -100 kg category.

The result is far from satisfying El Nahas, who was hoping to win it all in Japan. “I went into overtime twice, and it tired me out. I’m disappointed. I thought I could win the title, even if it’s my first World Championships,” he said.

Shady El Nahas started his day off by defeating Neo-Zealander Jason Koster. He then won in overtime against Khurramov Mukhammadkarim, from Uzbekistan, before winning his third fight, against Austrian Aaron Fara, also in overtime.

In the D-pool finale, the Canadian faced Russian Niyaz Ilyasov, ranked 23rd in the world. That is when he was defeated for the first time. “I was tired, but he was also a lot heavier than I am. It was a big difference, and I’ll have to work on my strength in the next few months,” commented the adoptive Montrealer.

In repechage, the 21-year-old lost against Japanese Aaron Wolf, keeping him from competing for a medal and eliminating him from the tournament.

His first World Championships participation made him gain valuable experience “I’ll remember the pain of being defeated for sure. I could also see that it’s very different from a Grand Prix or a Grand Slam. It’s a lot more competitive,” said El Nahas.

Also fighting in -100 kg, Kyle Reyes was eliminated in the second round. He first defeated Dubreta Anto, from Montenegro, before being eliminated by Irish Benjamin Fletcher, ninth on the world ranking.

Historical Record for the National Team

The Canadian team can say “mission accomplished” after having their best World Championships in history according to Judo Canada’s CEO, Nicolas Gill. “In 1981, we had won two bronze medals. It’s the second time our athletes win two medals during the same World Championships.”

Christa Deguchi became the first Canadian judoka in history to be crowned world champion after winning the title in -57 kg. The historical gold medal was earned in her homeland against Japanese Tsukada Yoshida, whom she has known for a long time. “There was a lot of apprehension around Christa, and she offered a great performance. She’s an exceptional athlete, and judo experts and fans love to see her in action,” commented Gill.

Antoine Valois-Fortier is having a great comeback to competition and showed once again there’s still a place for him amongst the world’s elite. He won six bouts and won a bronze medal in -81 kg.

“It’s a great gift for him. It’s not a surprise for us, but maybe other judokas had forgotten about him, and they were surprised. We know that he won’t be in Tokyo just to make up for the numbers: he’ll be competing for a second Olympic medal.”

Like Shady El Nahas on Friday, Constantin Gabun offered a good performance at his first World Championships with a ninth place in -73 kg. He was eliminated by the number 1 on the world ranking, Azerbaijani Rustam Orujob, in a very close fight.

“Our current team is very strong, and we are focusing on Tokyo, but we have to keep developing young athletes to maintain this level of performance, and we are going in the right direction.”