Three Canadian Judokas on the Podium in Santo Domingo 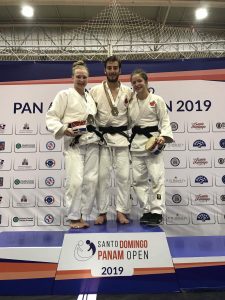 Montreal, September 6, 2019 – Three Canadian judokas were on the podium on Friday at the Pan American Open in Santo Domingo, in the Dominican Republic. Julien Frascadore won the gold medal in -66 kg, while Virginia Nemeth and Isabelle Harris each won a bronze in their respective categories.

Frascadore won the finale against Venezuelan Ricardo Valderrama to earn the gold medal. In his opinion, his preparation and state of mind made all the difference in his victory by waza-ari in overtime. “It was the most difficult fight today, but I had a good plan, and I really wanted to win,” he commented.

Julien Frascadore scored four victories in just as many fights on Friday. Before facing Valderrama in a close fight, the Canadian defeated Dominican Wilson Medina, Haitian Gérard Cadet and Dominican Victor Pena, all three by ippon.

“It went well. I was aiming for gold, and everything went according to plan,” said Frascadore, who added he felt ready for the Junior World Championships in October. “I’ll come back home and work on a few technical details. It’s very motivating to win gold before Worlds, and it confirms that I’ll be ready.”

Gabriel Juteau almost ended the day with a medal around his neck in -73 kg. He started off with two victories: one by ippon against Haitian Roudly Rosalberty, followed by another one against Dominican Darvi Lorenzo. After being defeated by ippon by the eventual gold medallist, Venezuelan Sergio Mattey, Gabriel Juteau eliminated Dominican Antonio Tornal to earn a spot in one of the bronze-medal contests. However, the 22-year-old lost against Mexican Gilberto Cardoso, keeping him off the podium.

Sava Antic didn’t make the weight at the weigh-in and couldn’t compete in this category.

Canadian girls also had a lot of success in Santo Domingo. Virginia Nemeth was the first one to stand out with a bronze medal in the -48 kg category. She finished on a high note with a victory against Guatemalan Jacqueline Solis to earn her spot on the third step of the podium.

The Canadian won against Dominican Liliana Guerrero by ippon at the beginning of the day, but was then defeated by Priscilla Moran, from Mauritius. In repechage, she scored another victory, this time against American Jenna Schurr. “We had a good training camp this summer and it really helped our preparation for this competition,” commented Nemeth. “It’s a step in the right direction! I’m happy, but there’s always room for improvement, and there’s still a lot of work to do.”

Isabelle Harris faced Sandrine Billiet, from Cape Verde, for her fourth bout of the day, during which she won by ippon to earn a bronze medal. The Canadian had ups and down on Friday: she won by ippon against Spanish Vlada Kopnyayeva in the first round, but was defeated by ippon by Cameroonian Hélène Wezeu Dombeu in the following round. Her defeat sent her into repechage, where Harris faced Dominican Katherine Carjaval Antigua, whom she defeated by ippon to reach the bronze-medal fight.

“I won my first fight, but I wasn’t satisfied with my performance. In the second round I did better, but it wasn’t enough. I was able to bounce back in repechage and end on a high note,” explained Harris.

Finally, Cheyenne Fiandor narrowly missed the podium in -57 kg. She lost against Columbian Keyla Vasquez in the bronze-medal bout. Fiandor was defeated in the first round by Dominican Ana Rosa, but won by ippon in repechage against Dominican Marialy Marte.