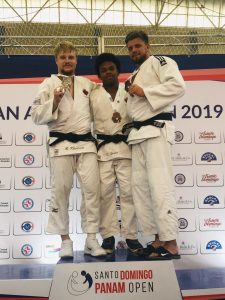 Montreal, September 7, 2019 – Canada concluded the Pan American Open with three medals on Saturday, one silver and two bronzes, in Santo Domingo, in the Dominican Republic.

In -90 kg, Benjamin Kendrick was in the gold medal match, but was defeated by Dominican Robert Florentino. Earlier, in the semifinal, Kendrick defeated his teammate Danil Neyolov, who ended with a bronze medal. Keagan Young (-81 kg) also won a bronze medal.

“This tournament was a preparation for the Junior World Championships held in Marrakech on October 16-19. We were coming here for the experience, and we can say, ‘mission accomplished’. We are happy with how the athletes performed,” commented coach Jean-Pierre Cantin, adding that Ontarians Kendrick and Young are still juniors.

Before reaching the finale in -90 kg, Benjamin Kendrick had defeated Dominican Marcos Martes before facing Neyolov.

“It was a finale with two left-handed athletes, and it was hard for Benjamin. The other one was dominating and threw him for an ippon,” said the coach.

Neyolov defeated his opponent in the first round, Dominican Franklin Guzman, by ippon.

Keagan Young had a good day in -81 kg. He won his first fight of the day by ippon against Dominican Oscar Santana before eliminating American Alex Jacobson in the second round, also by ippon.

In the semifinal, Young was defeated by Venezuelan Noel Pena, sending him into the bronze-medal contest against American Grant Johnson.

“His loss in the semifinal was caused by penalties for non-combativity, and the last one was pretty questionable. However, in the bronze-medal match, he dominated his opponent by ippon. He made some mistakes here, but he’ll be ready for the World Championships,” concluded coach Cantin.