Montreal, July 6, 2019 – After the gold, silver and bronze medals won by Canadian athletes on the first day of the tournament, two silver and two bronze medals were added to the collection at the Montreal Judo Grand Prix on Saturday.

Antoine Valois-Fortier (-81 kg) and Kelita Zupancic (-70 kg) stood on the second step of the podium, and Catherine Beauchemin-Pinard (-63 kg) and Antoine Bouchard (-73 kg) each won a bronze medal. 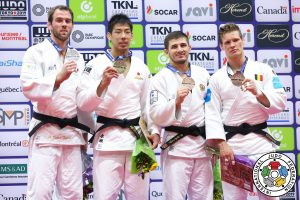 Facing his sworn enemy, Rio Olympics bronze medallist Takanori Nagase, from Japan, the Quebecois was energetic during the fight. Nagase threw him and scored an ippon with a little over one minute left on the clock.

“I still haven’t found the way to defeat him, and last time I faced him was in Rio. I was in control of the rhythm and positioning my hands well, but when we were on the edge, I tried to push him outside to make him get a penalty. He used my push to throw me and scored a great ippon. He hasn’t lost often in his career, and next time, I’m confident I can go a little further, maybe even win.”

Despite his loss, the London Olympics bronze medallist said he was happy to experience a Grand Prix in front of a home crowd.

“I knew we would have more support than usual and I had a lot of fun competing today. The tournament promotes judo in Canada and it shows we can win medals against strong opponents.” 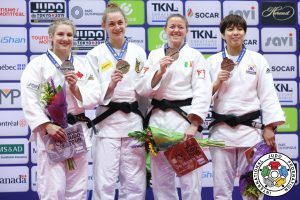 In the gold medal finale against German Giovanna Scoccimarro in -70 kg, Ontarian Kelita Zupancic has nothing to be ashamed of either, after being defeated 10 seconds before the end of regulation time. She was certainly disappointed with her last fight, but she was already looking ahead.

“There’s a year left before the Olympics and I tried new techniques. It was the right time to do it, and I know I’m almost there. I still need the finishing touch to make sure everything works in competition. I’ll be ready for Tokyo and I’m excited! I’m older, it’s my last year. Experience and creativity are a necessity to go so far and to aim for a third Olympic selection,” explained the athlete, who felt a lot of love from the crowd at the Maurice-Richard Arena.

Beauchemin-Pinard and Bouchard End With a Victory

In the bronze-medal contest in -63 kg, Catherine Beauchemin-Pinard ended on a good note against Katharine Haecker. She defeated the Australian with an immobilization on the ground, in which her opponent tapped out after 15 seconds.

The Quebecoise said she felt shaky after her loss in the semifinal against British Amy Livesey, the silver medallist, after having two very good fights.

“It can be hard to find your motivation when you lose and have to go back and fight for a bronze medal. I lost my motivation after the semi-final, but I was able to come back to win the bronze, and I’m really happy. I saw people I know in the hall and they encouraged me. I told myself it would be worse to end with another loss. I wouldn’t take it.”

Bouchard (-73 kg) had a similar day, and was also able to put his semifinal aside and end with a victory.

“I knew I had to put more pressure on him than he put on me. I had a chance on the ground and took it. I was told Brazilians are very good on the ground, and it’s the second time I win this way. They still haven’t found the way to defeat that technique,” said the athlete, who defeated Eduardo Barbosa.

Fifth at the Rio Olympics, Bouchard will be at the Budapest Grand Prix next week and will get a shoulder surgery after, “It was important for me to get as many points as possible before surgery so I wouldn’t have the added pressure of earning points when I’m back to competition.”

Fighting in the other bronze finale in the same category, Arthur Margelidon almost threw German Anthony Zingg, but Zingg immobilized him with a little over 2 minutes left on the clock. The Montrealer ranked in fifth place.

The last day of competition of the Montreal Grand Prix will be held on Sunday.