Ecaterina Guica Plans to Bounce Back 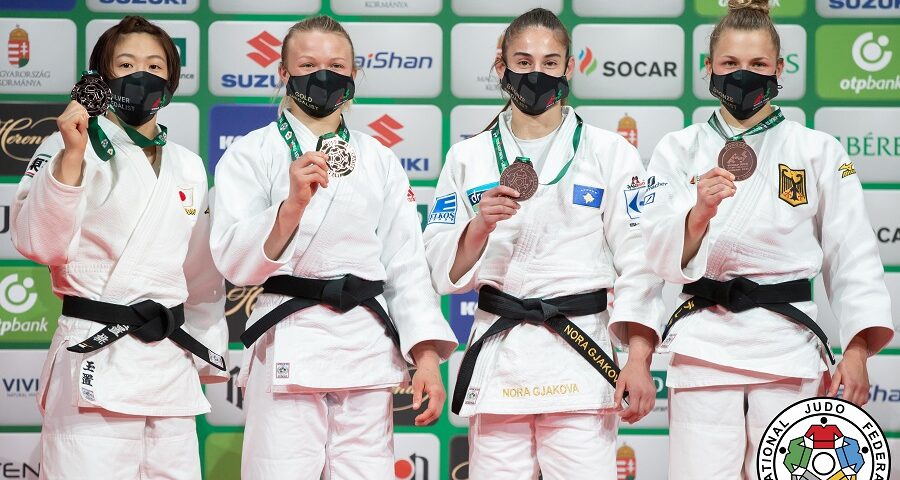 Montréal, June 8, 2021 – The suspense is over! In a few weeks, Jessica Klimkait will represent Canada in the under-57 kg weight class at the Tokyo Olympic Games. And what’s more, she will arrive in Japan as the reigning world champion. At the Judo World Championships in Budapest on Tuesday, the Ontarian put on an explosive performance in the final to beat Japan’s Momo Tamaoki by waza-ari in golden score.

The world title therefore remains in Canada, as Christa Deguchi won the previous world championship, which took place in 2019. Today, Deguchi finished the tournament in fifth place after bowing out to Germany’s Theresa Stoll in one of the two bronze medal finals.

“It’s still going to take some time to soak in, I think, but it’s been a crazy day,” noted the newly crowned world champion. “Everyone was watching and waiting to see which Canadian would go [to the Olympics], and whoever it was, they would be able to take a medal.”

Klimkait’s perfect day at the World Championships today was the culmination of several years of hard work.

“The past two or three years have been a crazy ride, and once Covid hit, there was still no confirmation of what the decision-making process would look like with the Covid restrictions. It’s been a long journey of highs and lows, but the situation pushed me to be the absolute best athlete I can be. In retrospect, I’m thankful for the situation; it’s the reason I was able to have a good day today [Tuesday].”

The 24-year-old judoka explained that her semi-final bout was the turning point in her quest for the podium.

“I wasn’t totally satisfied with my first few bouts, and I knew something had to change in the semi-final. The way I felt during that fight showed me that I was able to really perform to the best of my abilities today and that there was no reason I shouldn’t set my sights on the final.”

In her semi-final match against Nora Gjakova of Kosovo, Klimkait was quick to show her opponent the door, scoring an ippon two minutes into the bout.

In the other semi-final, which took place immediately afterwards, Deguchi knew she had to beat Momo Tamaoki of Japan if she wanted to keep her Olympic dreams alive.

In a match that could have gone either way, Deguchi remained in control and skillfully contained her challenger’s attacks; however, she did not score any points during the four minutes of regulation time, and the bout went into overtime.

The battle remained tight and Deguchi did not let up, even though her nose was bleeding on and off. Tamaoki knocked Deguchi to the ground, and after viewing the video replay, the officials ruled that the Japanese athlete had scored.

“Both Sasha [Mehmedovic, Deguchi’s coach] and I were surprised by the call, but it’s the call they made, and it decided the match. There was nothing I could do about it,” said Deguchi.

Klimkait therefore knew she had her ticket to the Olympics before her final fight for the world title.

“Honestly, momentarily, watching that fight came with a lot of emotion. But I knew I could become a world champion today, and I was ready for whoever it was. So I didn’t soak everything in instantly, and I kept my focus for the finals,” stated Klimkait.

In her fight for third place, Deguchi struggled to position herself to attack Stoll. The German’s greater size enabled her to get a better grip on the Canadian, and she scored an ippon eight seconds into overtime.

“To be honest, I was physically and mentally drained. I gave it my best, but it wasn’t enough today,” said Deguchi.

Due to health regulations that prevented Klimkait and Deguchi from competing in a fight-off on Canadian soil, Judo Canada decided, in consultation with the athletes, that the result of the World Championships would determine which of the two would represent the country in their weight category at the next Olympic Games.

Étienne Briand (under-81 kg) will be the only Canadian in action on Wednesday.