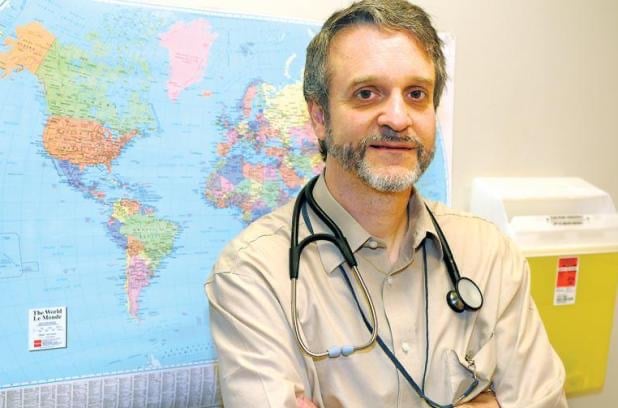 People from all walks of life have stepped up since the start of the COVID-19 pandemic to allow Canadian judokas to train. Among them is Dr. Pierre Plourde, who has greatly contributed to the plan to return to competition, both in the province of Manitoba and on the national scene.

A Medical Officer of Health’s schedule is already very busy, especially during a pandemic. The one of Dr. Plourde is no exception. Already greatly involved, especially in Haiti and in the community of Split Lake in northern Manitoba, he also offered his help after seeing the judokas of the region deprived of their favourite sport.

A Medical Officer of Health at the Winnipeg Regional Health Authority (WRHA), Dr. Plourde has also managed the Saint-Boniface judo club for over 25 years. He has been involved for several years with various provincial judo committees, particularly in the event of injuries during various competitions.

Judo Manitoba, therefore, asked him for a hand to facilitate the return of judo in the province. Already supporting his Winnipeg colleagues in public health in interpreting the instructions and making adjustments to them so that they are consistent with the realities of sports, especially combat sports, he ultimately saw his work shine nationally.

“I was asked to help with the return to sport protocols during the pandemic. I reviewed what Judo Canada had produced and had some comments as a Medical Officer of Health. I contacted the federation, speaking mainly with Nicolas Gill, and I participated in several videoconferences. I have had the chance to comment not only as a specialist, but also as a judoka and sensei.”

The CEO and High Performance Director of Judo Canada is not shy to praise Dr. Plourde’s volunteer involvement. “One of the beautiful things that the pandemic has allowed us is to discover is Dr. Pierre Plourde! Rather unknown to Canadian judo before spring 2020, his unexpected involvement made us discover a judoka who perfectly represents the values of judo: modesty, sincerity, politeness and respect! His contribution and his expertise have allowed us to offer our members top quality protocols which have subsequently enabled a safe resumption of judo across the country,” explains Nicolas Gill.

After giving his opinion on Judo Canada’s plan, Dr. Plourde was able to reuse his work with some adjustments for Manitoba. A work that was applauded by the majority of those involved in his province.

“It was really helpful for our senseis and our clubs. The provincial team was able to continue training, except for a few interruptions, and everyone said the guidelines helped tremendously.”

Milton Good, President of Judo Manitoba, emphasizes the importance of his work. “Dr. Pierre Plourde has been and continues to be a valuable member of Judo Manitoba. Dr. Plourde is the shining example of professionalism and volunteerism while remaining humble as always. We are very fortunate to have him as part of our Judo Family. He has been a valuable asset for us with our return to play protocols in Manitoba. All while continuing to meet all of his other professional and personal obligations.”

It was Dr. Pierre Plourde’s father who introduced him to judo when he was only six years old and living in New Brunswick. This martial art has never left his life since.

“It’s a big part of my life. I tried other sports, but it was only judo which I continued to practise regularly,” confirms the black belt (Sandan), who now focuses on the administration of the Saint-Boniface Club, after having been a coach for many years.

Dr. Plourde did not hesitate to use his expertise to help the sport and athletes: he wants to be part of the solution. “My philosophy is that I should always be useful instead of being a barrier. I have to facilitate the conversation, be pragmatic.”

He sustained his voluntary contribution in the past year and a half. “Our recommendations were not perfect, but good enough to decrease or minimize the spread of the virus in sport, while continuing to practise it.”

The return to the tatami required the collaboration of the whole community. At his club as in the various committees, Dr. Plourde believes that it is this co-operation that has made the practice of sport possible. “It’s a great teamwork between the clubs. We got together and it was an opportunity to solidify our solidarity in the province.”