A First Medal in Lima for Mohab El Nahas 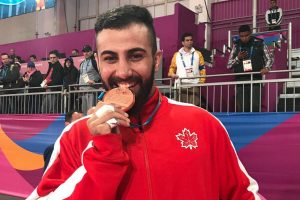 Montreal, August 10, 2019 – Mohab El Nahas won Canada’s first medal in judo at the Pan American Games in Lima, in Peru, on Saturday, with a bronze medal in -90 kg.

Just two days ago, his participation at the Pan American Games was still uncertain because of a virus. “He was taking antibiotics, and even had to be placed under quarantine because he was contagious! We didn’t know what he had. Two days ago, he wasn’t fighting. This morning he was pale, but I told him to go one fight at a time, and it went well,” explained coach Jean-Pierre Cantin.

“I talked to my parents before the competition started and they told me not to fight if I was too sick. I felt good enough, and I’m happy I could prove them I was right!” said the bronze medallist, who was competing for the first time at the Pan American Games.

Mohab El Nahas convincingly defeated Dominican Robert Florentino by ippon at the end of the day to earn a spot on the podium. “It was very important for me to win and take my revenge after being defeated by him at the Pan American championships,” explained El Nahas. “In my opinion, he was the best in the category, so I’m really happy with my victory.”

The Canadian judoka didn’t get a good start in Lima as, according to his own words, “my head was still in the clouds and I was ill-prepared.” He was quickly defeated by ippon by Brazilian Rafael Macedo, sending him into repechage. Mohab El Nahas then faced Venezuelan Antony Pena and was awarded the victory after his opponent lost by penalties.

“All my fights were done pretty quickly, which was good for me, because I was sick. I thought the longer it would be, the worse it would be for me,” he added.

Jean-Pierre Cantin thinks the athlete can be very proud of himself and of his performance. “He was very strategic, and his opponents fell for it. Mohab wasn’t nervous, and that’s when he can offer beautiful judo.”

Emily Burt Just Outside the Podium

Emily Burt (-70 kg) started off with a loss after a hard-fought match against Cuban Onix Cortes, and was sent into repechage. She came back strong by eliminating American Chantal Wright and earned a spot in the bronze-medal contest.

Unfortunately, the judoka wasn’t able to win a medal like her teammate; she lost against Peruvian Maria Perez. “Emily was unlucky. It was going great and she had a good sequence, but her knee gave out and she had to stop,” explained Jean-Pierre Cantin.

Marc Deschênes (+100 kg) and Mina Coulombe (-78 kg) will try to reproduce El Nahas’s performance on the tatamis in Peru, on Sunday, on the last day of competition at the Lima Pan American Games.