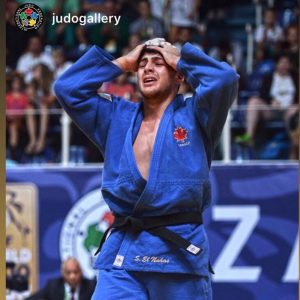 Montreal, July 28, 2019 – Shady El Nahas had a perfect day on Sunday at the Zagreb Grand Prix, in Croatia. After winning all his fights, the Canadian judoka won his first ever gold medal in an international tournament as a senior.

Shady had to face big challenges all day long. He faced his biggest challenge in the finale, where his opponent was French Alexandre Iddir.

After 4 minutes of regulation time, both athletes were still even, and the patience of the Canadian paid off in overtime.

“The French is left-handed and was very disciplined. Shady worked hard to win the fight. He took an opportunity in overtime and won with a beautiful ippon. It’s a great victory,” said national team coach Michel Almeida, who’s very happy with the first international gold medal of his protégé.

“It was a very, very good performance. He showed he was one of the bests, and he deserves this medal. I’m proud of his hard work.”

Earlier in the day, El Nahas won his bouts in the preliminary rounds against Cyrille Maret (France), Mikita Sviryd (Belarus), and Jorge Fonseca (Portugal) to reach the semifinal, where he faced Israeli Peter Paltchik, ranked 4th in the world. El Nahas handled the pressure and defeated his opponent by waza-ari.

“He was in control throughout the fight. Paltchik is excellent and Shady seized the opportunities to win. It was a great day for him,” added Almeida.

Also fighting in -100 kg, Kyle Reyes was defeated early on by Hungarian Miklos Cirjenics and was eliminated.

The last Canadian in action, Zachary Burt (-90 kg), won his first duel by ippon against Croatian Mario Hitzthaler before being eliminated by the eventual 7th place, Mammadali Mehdiyev, from Azerbaidjan.

Five Canadians were in action on the last day of the Junior European Cup held in Berlin, in Germany.

Alexandre Arencibia fought in the -81 kg category, even though he suffered a rib injury.

After winning by ippon against Turk Muhammed Koc, Arencibia was defeated by the eventual silver medallist, Italian Komi Kenny Bedel, in a fight where he worsened his injury.

“Alexandre injured himself earlier this month, and it seemed stable when we arrived in Berlin. He wanted to compete. Sadly, a bad fall in the bout against the Italian revived the pain. He fought well, but he lost,” commented coach Jean-Pierre Cantin.

Despite the pain, Arencibia was back on the tatami a few minutes later to face Belgian Pieter Vandyuk in repechage, in a fight that didn’t end like he wanted.

“He gave everything today (Sunday), but we had to stop the fight. The pain was too sharp, and he couldn’t perform at his usual level. That being said, he did some great things and I think he would have performed very well without the injury,” added Cantin.

The only other Canadian to score a victory was Kelly Taylor (-57 kg). She won against German Anneliese Trappe before being defeated by Hungarian Andrea Karman.

Taeya Koliaska (-52 kg) was forced to give up on her first fight because of an injury, and her teammate Ian Ryder (-100 kg) saw his day come to an end after losing against Turk Omer Aydin.

While he doesn’t want to make excuses, Cantin admits the fatigue was an important factor in the results of the weekend.

“If we’re being honest, juniors worked hard during the last month! Some of them were competing for the fourth time in July, on top of a lot of training. I think the results are a reflection of what we asked of them,” he said, adding that the workload wasn’t necessarily a bad thing.

“I think they showed us they respond well to pressure. They are at a level where we need to push them, and I’m happy to see how they reacted.”

Jean-Pierre Cantin and his team will be back in Canada on Monday to rest for a few days before the next junior national camp starting next week.