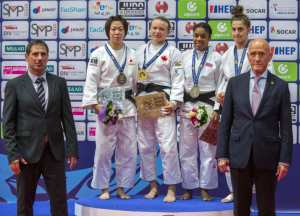 Montreal, July 26, 2019 – For the first time in her career, Canadian judoka Jessica Klimkait stood on the highest step on the podium at a Grand Prix on Friday, in Zagreb, in Croatia.

For the final contest in -57 kg, the Canadian, ranked 7th in the world, was up against Japanese Momo Tamaoki, 12th on the world ranking, and won her fifth bout of the day by ippon. Tamaoki was disqualified with 30 seconds left on the clock when she tried to throw Jessica by twisting her arm.

“It was a bittersweet way to walk away with the gold. My arm is okay though!” said Klimkait.

Klimkait’s performance earned her a first Grand Prix gold medal. In the past, she had won two bronze and four silver medals, one of which was won in Montreal in the beginning of July. 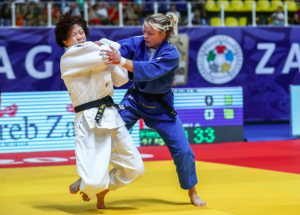 “I felt really good today, I was able to perform with this quality of judo for a while, and today it clicked. It’s also nice to have this kind of result close to worlds.”

On top of her perfect score, coach Michel Almeida says Jessica can be proud for many reasons. “Beside the great result, it’s important to remark that she achieved this result by eliminating two of the few girls against whom she had lost over the previous two-year period, namely Nekoda Smythe-Davis in semifinal and Momo Tamaoki in the final.”

“The second positive remark, not by order of importance, regards her performance throughout the day, where she consistently and successfully applied small adjustments made to her usual strategy.”

Also fighting in this category, Christa Deguchi injured her left foot during warm-up and couldn’t compete. She was supposed to face Georgian Eteri Liparteliani, the eventual bronze medallist.

Ecaterina Guica was in action in -52 kg. She won against Slovak Andrea Krisandova in the first round, before being eliminated by Georgian Tetiana Levytska-Shukvani. She didn’t get a ranking.

“Similar start as Jessica, but different ending. Ecaterina was eliminated on her second round and saw a premature ending to her competition,” commented her coach.

The Zagreb Grand Prix will continue on Saturday and several Canadians will be under the spotlights. On the women’s team, Catherine Beauchemin-Pinard (-63 kg) and Kelita Zupancic (-70 kg) will be in action, as well as Arthur Margelidon (-73 kg), Antoine Valois-Fortier (-81 kg), and Étienne Briand (-81 kg) on the men’s team.