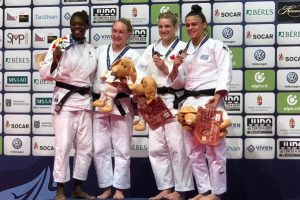 Ranked 13th on the world ranking, Zupancic defeated Brazilian Maria Portela, 6th in the world, to earn her spot on the podium.

After winning her first two fights, the athlete from Whitby, in Ontario, was defeated in overtime by Spanish Maria Bernabeu, ranked 15th and eventual silver medallist at the tournament.

Canadian then won in repechage against Tunisian Nihel Landolsi, earning her a ticket for the bronze-medal bout.

“The star of the day was obviously Kelita Zupancic. Through a systematic mix of grip fighting, strategic attacks and her trademark ground work, she was able to succeed in all but her quarterfinal match,” said coach Michel Almeida.

Also fighting in -70 kg, Emily Burt was eliminated after her first and only bout. After getting a bye through the first round, the Ontarian was defeated by Portuguese Barbaro Timo.

Good Performance for the Men’s Team

On the men’s side, in -73 kg, Antoine Bouchard was eliminated in the third round after Uzbek Giyosjon Boboev won the match. Bouchard had previously defeated Somon Makhmadbekov, from Tajikistan, and Timo Allemann, from Switzerland.

Also in -73 kg, Constantin Gabun was eliminated in the second round by the eventual gold medallist, Kosovar Akil Gjakova. Michel Almeida had some good comments on Gabun’s performance.

“Despite not achieving any classification, Constantin Gabun left a good impression of his fighting abilities. This was his second Grand Prix, after his debut in Montreal last week,” he added.

On Sunday, Canadians Zachary Burt and Mohab El Nahas will both be competing in the -90 kg category.