Seven athletes to represent Canada in judo at Lima 2019 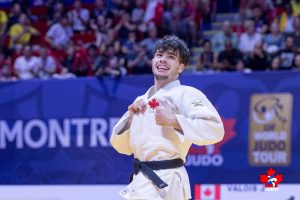 MONTREAL (July 12, 2019) – Judo Canada and the Canadian Olympic Committee have selected seven athletes to represent Canada in judo at the Lima 2019 Pan American Games in Peru. It will be a golden opportunity for athletes to live the experience of a major Games.

“The Pan American Games are not an Olympic qualifier but represent a great opportunity for our next generation athletes,” said Judo Canada coach Jean-Pierre Cantin. “It’s a very good tournament with high-calibre judo. They’ll have to be ready to win a medal as it won’t be easy.”

Among the delegation are Valois and El Nahas who are seen as potential medallists. Both recently stood out at the Senior Pan American Championships in Lima and at the Montreal Grand Prix, where they respectively ranked third and fifth.

Coach Cantin believes Valois will have momentum on his side at Lima 2019.

“If he’s well prepared and if he delivers the performance he’s capable of, Jacob could win the gold medal,” said Cantin. “Things are going very well for him. With his result in Montreal, he got into the top-30 in the world. He’s ranked ahead of other Canadians and, technically, he’d be the last one selected for the Olympic Games with the continental quota. It can change at every tournament but right now, he’s in a very good position.”

For Canada’s next generation judokas, the Pan Am Games will allow them to experience and embrace the atmosphere and environment that comes with a major multi-sport Games.

“You get easily get out of your element in these environments,” said Cantin. “Judokas like Jacob, Mohab, Emily, Mina and Marie have potential to compete at the Olympic Games and they can benefit from this experience. It will help build their confidence.”

These Pan American Games will be a first-time experience for some and a swan song for others, like veteran Marc Deschênes, who plans on taking advantage of his visit to Peru.

“Pan American Games are very important for me,” said Deschênes. “It might be my last major Games, so I want to make the most of it and perform!”

Having competed at TORONTO 2015, the Laval native will easily find his bearings.

“My previous experience will help because I’ll know what to expect,” added Deschênes. “Toronto was a big and impressive tournament! I know I won’t be a favourite as there are tough opponents in my path but I think I could surprise people.”

The athletes and coach nominated are: