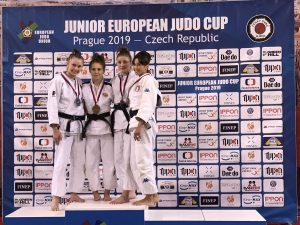 Montreal, July 21, 2019 – Canadian Taeya Koliaska barely missed the highest step of the podium in -52 kg on Sunday, during the Junior European Cup held in Prague, in the Czech Republic.

The Albertan was defeated in the finale by Russian Tatiana Tsygankova, who won by ippon. Koliaska won her first two fights, against Spanish Lucia Munoz Solano in the preliminaries and British Yasmin Javadian in semifinal, by ippon.

“It was a good day. Last year, I ranked in fifth place. I felt really strong and followed the game plan. I couldn’t execute my attacks against Tatiana. In hindsight, I think I should have gone for it,” said Koliaska, who will be competing at the Junior European Cup in Berlin next weekend.

Kelly Taylor (-57 kg) ranked in 5th place. The Canadian lost by ippon against German Seija Ballhaus in one of the bronze-medal contests.

“Her opponent was very strong, and she had an unusual style. I’m very proud of her and we’ll work on different things this week during the training camp to do better in Berlin, and potentially at the Junior World Championships,” commented coach Jean-Pierre Cantin.

Earlier in the day, after one win and one loss in the preliminary rounds, the Albertan won her 3 bouts in repechage against Azerbaijani Ulviyya Bayramova (waza-ari), Spanish Carolina Rivero Suarez (ippon) and Portuguese Mafalda Ezequiel (ippon).

“She lost a fight in the preliminaries, against the eventual champion, Czech Vera Zemanova. The European style is very physical, and not classic for a Japanese like Kelly. She had a hard time adapting to it. She still did pretty well in golden score. It’s her first time in Europe, so I think it was a good result,” explained Cantin.

Also fighting in this category, Albertan Alexandra Gagnon didn’t get a ranking with her score of one victory and one loss in the preliminaries.

Arencibia and Ryder in 9th place

Alexandre Arencibia (-81 kg) ended in 9th place. The Montrealer had a score of 2 victories and 1 loss in the preliminaries. He was eliminated by ippon in repechage by German Alexander Neihs.

“He was injured on a rib last week, so he couldn’t really train. On the first bout he lost, he fell on his rib and it was painful. He was mentally ready, so he tried his best, but it wasn’t enough,” commented the coach. “He still defeated strong opponents and had good fights; it was great with the competition he had. With a good health, he can go far, as he has proven in the past.”

Ian Ryder (-100 kg) also ranked in 9th place, but had a different day. The British Columbian scored one victory and one loss in the preliminaries, before being eliminated in repechage after Hungarian Zsombor Veg, the eventual bronze medallist, scored an ippon.

“Alex and Ian are in their first year as juniors, they still have a lot to learn. Ian just got into his new category, and he’s still a little light. He had nice fights, but he needs a little more time to adapt,” said Jean-Pierre Cantin.