The Fleur-de-lys Makes its Mark in Calgary

May 27, 2017 – Quebec’s representatives stood their ground on Saturday at the Canadian Judo Championships Presented by biosports.team, which are being held in Calgary this weekend. They claimed more than 50 medals in the U16 and U21 age groups alone!

The day’s full results can be found  online at http://www.judocanada.tv/resultatsresults/

In the U21 group, which itself collected eight gold medals, Emily Burt (U70 kg) and François Gauthier-Drapeau (U73 kg) were particularly impressive.

Burt dominated Adriana Portuondo-Isasi of Quebec in the U70 kg final. “I knew it would be hard to get her on the ground because she’s stronger and heavier than me. So I acted strategically and it worked,” she explained.

The 21-year-old Whitby native, who normally competes in the U63 kg division, decided to take a chance in the U70 kg group for this tournament. “I didn’t necessarily expect to win because I changed weight classes, but I am really, really happy! My main objective was to be ready for my European tour, which is coming up after the Nationals,” added Burt.

Her recent success will be a boon to her confidence as she heads into the remainder of the season. “It’s a step toward even bigger tournaments.”

François Gauthier-Drapeau also put in a perfect performance on Saturday in the U73 kg division.

“This is the big event every year and it’s the one that stresses me out the most. Having finally won it is very encouraging and motivating for me going forward,” noted Gauthier-Drapeau, visibly relieved.

Gauthier-Drapeau completely dominated his four opponents today, including fellow Québécois Constantin Gabun in the final. “I haven’t won at the Nationals for six or seven years. It feels great to be back on the highest step of the podium.” 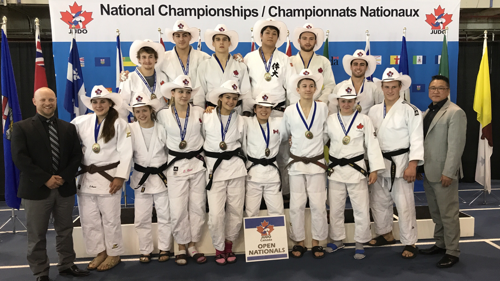 From Great Britain to Ontario

Freshly arrived from Great Britain a week ago, James Millar is now a member of Judo Ontario’s coaching team. His new protégés captured 12 medals on Saturday in the U16 and U21 age groups. “We’ve had a great weekend so far,” he noted.

The former member of the British national team is pleased with his new role in his adopted country. “The Canadian system is well-known for its talent creation and the long-term development of its athletes. It’s a great opportunity for me to make a contribution.”

The Canadian Judo Championships Presented by biosports.team will conclude on Sunday in Calgary with the senior-level events.