A Successful Canada Day in Mexico and China

Montreal, July 8, 2017 – After ousting her Polish opponent, Zuzanna Komarek, by ippon in the U57 kg bronze medal final, Canadian judoka Yumi Amal Bellali stepped onto the third level of the podium on Saturday at the Junior European Cup, being held in Gdynia, Poland. 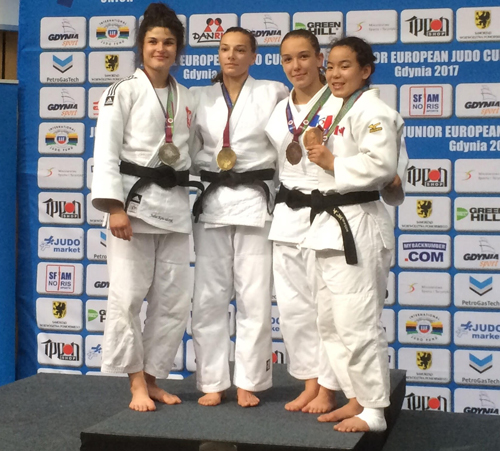 The 17-year-old Québécoise started off her day with victories over Poland’s Anna Dabrowski and Portugal’s Wilsa Gomes. Her winning streak came to an end in the semi-final, however, when she bowed out to Poland’s Julia Kowalczyk, who won by waza-ari after four minutes of combat.

“Yumi was our best athlete of the day. She put on a powerful performance and was rewarded with the bronze,” stated national coach Jean-Pierre Cantin. “She relied on her strengths to dominate her opponents throughout the day. Her performance was dynamic and explosive.”

In the same weight class, Camelia Pitsilis struggled to get ahead in her two appearances on the tatamis. She was beaten in her first bout by Belgium’s Mina Libeer and in the repechage by Poland’s Zuzanna Komarek.

In U52 kg action, Marie Besson finished in the fifth spot after losing to Poland’s Aleksandra Kaleta in a battle for third place. She had enjoyed two victories in her first rounds before succumbing to the manoeuvres of Poland’s Klaudia Cieslik in the semi-final.

Taeya Koliaska finished the day with two losses to her name.

Virginia Nemeth placed fifth in the U48 kg group. Although she was defeated in her second bout of the preliminaries, she picked up her performance in the repechage and gained a spot in the bronze medal final. In the end, however, it was France’s Chloé Adam who climbed onto the podium to accept the medal.

“Marie and Virginia both fought fiercely until the final moments of their bronze medal bouts. They never let up,” affirmed Cantin.

Jacob Valois placed ninth in the men’s U66 kg competition. Following a loss in his second round of the main draw, he recorded one victory and one defeat in the repechage. His teammates Gabriel Juteau and Daniel Chosack-Barkay did not make it past their first matches.

In the U73 kg group, François Gauthier Drapeau began his day with a victory but was halted by Poland’s Cezary Tchorzewski in his second bout.

Neither Vincent Miran nor Bogdan Jora made it further than their first bouts in the U60 kg division.

The Junior European Cup will conclude tomorrow in Poland.