Two-Part Day for Valois and Guica in Tokyo 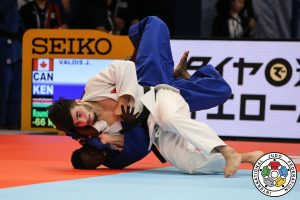 Montreal, August 26, 2019 – Despite a good first fight, both Canadians, Jacob Valois and Ecaterina Guica, were eliminated in the second round at the World Championships in Tokyo, in Japan, on Monday.

Fighting in -66 kg, Valois defeated John Nderitu Kairabi, from Kenya, in the first round. “I was happy to execute several techniques that I like, and I won pretty quickly,” he commented.

The second fight didn’t go as well for Valois: he was defeated by waza-ari in the last seconds by Ming Yen Tsai, from Taipei. His opponent already had two shidos on the board and made three mistakes in a row, but the Canadian couldn’t use it to his advantage.

“I made a mistake by attacking too quickly, and he took advantage of it, which cost me the victory. It’s a shame, because I was leading for a while,” he said.

It was a first time competing at the Senior World Championships for Jacob Valois, who thinks he gained experience. “I still have a lot of things to work on with my coach. My goal this year was to compete at Worlds, and I did it. I even did better than I thought I would with a medal at a Grand Prix,” added Valois, who won a bronze medal at the Montreal Grand Prix.

The judoka now hopes to qualify for the Tokyo Olympic Games. “I’m on the right track, and I know it’s a possibility. I’ll do everything I can to get there.”

On the women’s team, Ecaterina Guica (-52 kg) had a similar day. She won her first bout against Swiss Fabienne Kocher, who had eliminated her during last year’s World Championships. “It was a fight I knew I could win, and my victory made me think I’d have a great tournament,” she explained.

However, the Canadian couldn’t keep the momentum going and was eliminated by Belgian Charline Van Snick in the second round. “Unlike the first round, I wasn’t as aggressive, I didn’t attack as much. That’s what made the difference.”

Her opponent won by ippon with an arm lock early in the fight. “It didn’t have time to do much. I might have been able to resist a little longer, but it was really painful,” said Guica, who will be enjoying a week off in Vietnam before getting back on the mat.

World Championships will be continuing on Tuesday with four athletes representing Canada: Christa Deguchi and Jessica Klimkait in -57 kg, and Constantin Gabun and Arthur Margelidon in -73 kg on the men’s team.