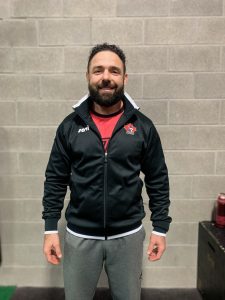 Montreal, November 5, 2019 – Anthony Carelli, professional wrestler and judo enthusiast, will become Judo Canada’s first official ambassador. As an ambassador, his role will be to promote Judo Canada and the sport of judo in Canada, as well as comment during webcasts and promotional events of the organization.

Carelli’s passion for judo was born early in life, after his mother enrolled him in judo as a child. His training taught him numerous precious life lessons, like accountability, the importance of putting the work in, and how to get back up after falling. He loved how easily progress could be tracked with the improvement of techniques, and the fact that even though it’s an individual sport, you need others to improve.

After having to step away from judo during his professional wrestling career, Carelli went back to his first love, judo, as soon as he retired from wrestling. Outside of his role as Judo Canada’s ambassador, he is teaching judo at the Battle Arts Academy in Mississauga, ON. He has been a Shodan for almost 30 years. “When I was younger, the only thing I cared about was winning. Not that I’m older, I regret not pursuing more grading,” he says.

Carelli already uses the vast social media following he has acquired to promote judo as much as he can. He works on a show called Aftermath and often ends the show by saying “Remember to put your kids in judo, you’ll thank me later,” and often tell aspiring wrestlers that judo is the best sport they can enroll in to become a professional wrestler one day. “My quest is to make judo more popular, more mainstream. I want people to think about judo first when they choose a sport to enroll their kids in after school. I want them to see it as a great option for cross training during the ‘off’ season.”

Anthony Carelli already has big plans to make judo more popular. “I want a YouTube channel with short and fun video content. I want to visit dojos, to promote the good sides of judo, to make it look cool. I want to see judo on the nightly news, like golf and tennis.”