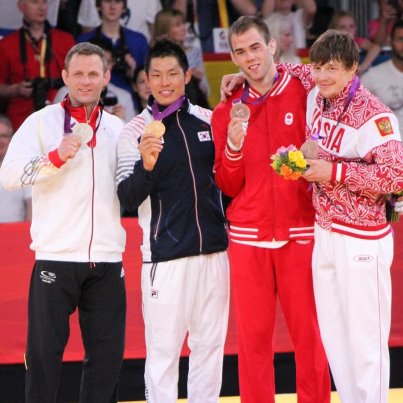 London, UK – July 31, 2012 (Sportcom) – After a twelve year wait, Antoine Valois-Fortier earned Canada another Olympic medal in Judo, Tuesday in the Under 81 kg category.  In the bronze medal final, the Beauport (Quebec) native beat out American judoka Travis Stevens, ranked 8th internationally.  Valois-Fortier’s medal is Canada’s first since Nicolas Gill’s silver in the Under 100kg category at the Sydney 2000 Olympic Games; this Olympic Games, Gill was beside the tatami as National Team Coach.

“Honestly I don’t really know how it all happened.  I think it will sink in over the next few days, right now I’m on cloud nine. The tournament was difficult, but the more I advanced, the more confident I became.  I followed my match plans and I stayed consistently focused,” commented the new Olympic medallist, his white judo robe dotted with blood stains.  “We suspected that whoever could score the first point could then control their opponent,” added Valois-Fortier referring to his match against Stevens, who was quickly tired out by the younger Canadian athlete.

The Quebecois judoka is ranked 22nd internationally, and demonstrated remarkable consistency throughout the day, defeating intimidating foes including a first bout against Azerbaijan’s Elnur Mammadli – 2008 Olympic Champion in the Under 73 kg category.  Valois-Fortier then faced home-crowd favourite, England’s Euan Burton, and Montenegro’s Srdjan Mrvalkevic – silver medallist at the World Championships.

Valois-Fortier’s sole defeat was in the quarter finals at the hands of Russia’s Ivan Nifontov, ranked 13th internationally.  The Canadian rallied back in the repechage, expertly eliminating Argentina’s Emmanuel Lucenti (24th internationally).

This Olympic bronze medal may well be priceless to the 22 year-old, who suffered a herniated disc that kept him off the tatami for more than a year.  Only two years later, the athlete who could barely tie his own shoes is tying an Olympic medal around his neck.

“Antoine is not the type to win by chance, he puts his all into it and works hard,” analyzed Coach Nicolas Gill.  “He had a similarly fantastic performance in Austria this February, and I knew he was capable of completing five or six bouts in the same day against extremely high-level competitors, he just had to make sure to do it July 31, 2012!”

Speaking about his only loss of the day, Valois-Fortier complimented his adversary, “It wasn’t a bad fight at all, it’s just that he followed his match plan to block my best attacks; he earned his win.”

So how will Canada’s newest Judo Olympic medallist celebrate his victory?  “We’re going to wait until the other team members have completed their matches so we can all celebrate together.  One thing is for sure, I’m so glad to be able to experience this with our current team – they are incredible and I’m so proud!”

Speaking of pride, Nicolas Gill believes that his athlete simply demonstrated what he’s capable of.  “I’m so incredibly proud of him; he really did everything he had to do and he was rewarded for it.  This is the result of his hard work and all we did was provide guidance; the hardest part is always the mental aspect – a rainy Friday afternoon it’s always more difficult to go train than to grab a beer with friends.  Antoine was dedicated to the sport from the start,” enthused Gill, himself a two-time Olympic medallist.

“It’s a little like my medal win in 1992: Antoine demonstrated that he could get there as an unknown.  My experience as an Olympic medallist in 1992 and 2000 was a bit of let-down, but with Antoine’s win today, I’m extremely happy!”

Alexandre Émond (Under 90 kg) and Kelita Zupancic (Under 70 kg) will be Canada’s judokas on the tatami tomorrow, Wednesday at the London 2012 Olympic Games.