A Day of Learning for Canadians

Montreal, October 28, 2017 – Canadian Zachary Burt had a huge smile on his face as his day of competition came to a close at the Abu Dhabi Grand Slam in the United Arab Emirates on Saturday. He won the bronze medal in the -90 kg weight class after overpowering Tajikistan’s Komronshokh Ustopiriyon by ippon. Ustopiriyon is ranked fifth in the world.

“I achieved my goal, which was to win my first medal in a Grand Slam. It was really a big win for me! I had fought Ustopiriyon once before, in February of this year. He’s quite a strong opponent. It was very a very close match. It went into overtime and I lost by a penalty. Still, I knew I was able to beat him, even though his style is very explosive,” said Burt, who hails from Oshawa and is currently ranked 32nd internationally.

Burt explained that in today’s bout, he was caught off guard early in the fight because Ustopiriyon made a move he had not anticipated. “Luckily, it wasn’t for a full point. I then used a move that I’ve been practising for quite some time and it worked perfectly. We went into Golden Score and I was able to pin him on the ground. He didn’t try to get out, he just tapped because he was exhausted.”

Burt had earlier been defeated in the semi-final when Spain’s Nikoloz Sherazadishvili, the eventual gold medallist, beat him by ippon. In the preliminary rounds, Burt dispatched of Ghana’s Victor Ahiavor and Serbia’s Aleksandar Kukolj, both by ippon. Kukolj is currently ranked first in the world.

“I’m amazed at my victory against Kukolj! He’s really tall and he’s left-handed, which is not good for me at all. Michel Almeida and I came up with a good strategy. Kukolj scored on me first so I had to play catch-up. I was able to even the score, which boosted my confidence. He attempted a sacrifice move and when he did, he gave up his position on the ground, so I was able to break his guard and pin him, which was awesome!” 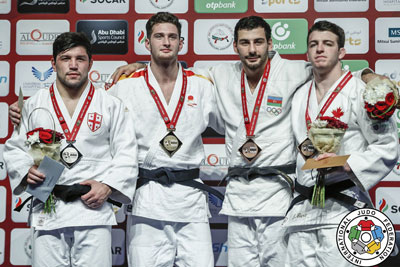 Two other Canadians were in action on Saturday at the European Cup in Malaga, Spain.

Jacob Valois finished ninth in the -66 kg group. His day came to an end in his second fight of the repechage when Germany’s Christoph Siegel ousted him by ippon. Valois, of Boucherville, had beaten Spain’s Eric Pena Artigas in an earlier match. In the preliminary rounds, he recorded one win and one loss, eliminating Britain’s Sean Martell by ippon and losing to Spain’s Adrian Fernandez Labrado by waza-ari.

Hanako Kuno (-63 kg) lost her first match of the day by waza-ari to France’s Morgane Brunet and therefore did not rank.