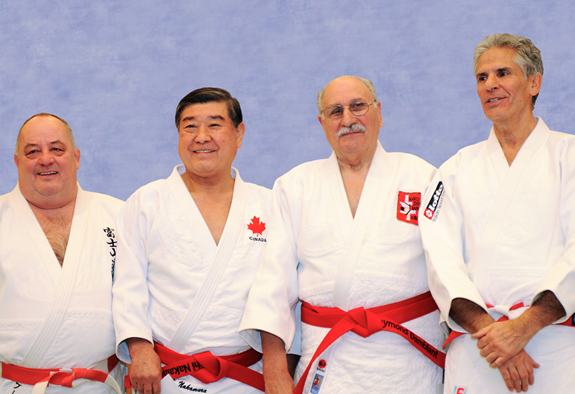 During the 2012 Kagami Biraki celebration in Quebec, two of the most prominent judoka in the history of judo  in Canada, were promoted to ninth degree black belts (Kudan).

Mr. Raymond Damblant is involved in judo for over 60 years and still serves as the technical director of the Hakudokan Judo Club in Montreal – one of the most successful judo programs in Canada.

Mr. Hiroshi Nakamura involved in judo for over 50 years is a head coach of Shidokan Judo Club –  today the largest and most successful competitive program in Canada and a  host to the National Training Centre.

From the left: Robert Arbour – the Chair of Grading Board for Quebec,

During the same ceremony,  Mr. Serge A. Piquette – former President of Judo Canada, was inducted to the Judo Canada Hall of Fame in the builders category.