Klimkait Shines in China with Another Bronze

Gabun Fights Hard, but is Defeated in Overtime

Jessica Klimkait in Gold at the Dusseldorf Grand Slam 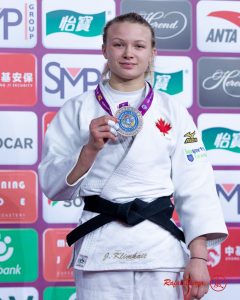 Montreal, December 12, 2019 (Sportcom) – For a second year in a row, Jessica Klimkait took advantage of her trip to China to stand on the podium at the Masters tournament, on Thursday, in Qingdao.

Klimkait truly worked hard to win her bronze medal. She won it by defeating former world champion and current number two on the world ranking in -57 kg, Japanese Tsukada Yochida.

“Before the bout, I knew I’d have to keep my distance with my grip and attacks. I did my best to get it and, in the end, it worked and I was able to throw her,” explained the Canadian after her win by waza-ari.

She was also happy to end her Asian tour with another medal in her luggage. Three weeks ago, she had won another bronze medal at the Osaka Grand Slam, in Japan.

“Before the tournament, I really started to feel that it was my fifth week in Asia. I didn’t fight as well as I wanted to, but I’m happy with the result. Going into the last bout, I decided to give it everything I had, because it was the last effort and I wanted to end on a high note.”

The path to the podium was pretty hectic for the Canadian, and each of her five bouts were close fights. Earlier in the tournament, the judoka, ranked fifth in the world, won against Austrian Sabrina Filzmoser and Serbian Jovana Rogic, who was disqualified.

Her only setback happened in the third round, against Chen-Ling Lien, from Taipei, when Klimkait was penalized three times, ending the match. Her victory against French Sarah Léonie Cysique in repechage opened the door to the medal round for the Ontarian.

Also fighting in -57 kg, current world champion Christa Deguchi was fighting for the first time since earning her title at the World Championships last August. The 24-year-old judoka lost her first match against North Korean Jin A Kim, who went on to win the gold medal.

“Sadly, it didn’t go as well as she’d hoped. I think Christa was a little nervous, and she needs to start competing again on a regular basis to get back in shape. She also had a rough first round against the North Korean, who was the eventual winner,” commented the national team coach Sasha Mehmedovic.

Also in action in the tournament, Ecaterina Guica started out strong in -52 kg by defeating Chinese Kexin Zhang. She was then eliminated in the following round by Russian Natalia Kuziutina, ranked third in the world.

On the men’s team, Jacob Valois lost in the first round against Georgian Vazha Margvelashvili, fifth on the world ranking, in the -66 kg category. “He started out strong, but a tactical mistake cost him the victory,” said Mehmedovic.

The Qingdao Masters will continue on Friday and five Canadian judokas will try to repeat their teammate’s performance by winning a medal. Catherine Beauchemin-Pinard (-63 kg) and Kelita Zupancic (-70 kg) will be representing Canada on the women’s side, and Arthur Margelidon will be in action in -73 kg. His teammates Antoine Valois-Fortier and Étienne Briand will be fighting in -81 kg.