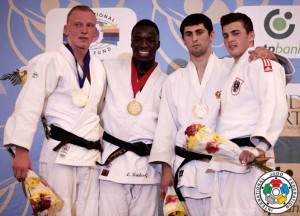 “I’m really happy. This is really hard feeling to explain; I dreamed of winning this title but I didn’t actually expect to become World Champion. I think I performed pretty well today; I also did train very hard to do well at this competition,” explained the Quebecois athlete.

“This was an outstanding day for Louis! His semi-final and final matches were real battles and he needed to dig deep to pull out these wins. Louis was 5th two years ago at the World Championships and he returned to on a mission to improve his standing from the last time,” said Coach Ewan Beaton.

Krieber-Gagnon started the day with successive wins – all by Ippon – against Estonian German Duran and Tunisian Oussama Mahmoud Snoussi. In the quarter finals, the Canadian won against Israel’s Idan Vardi who was disqualified.

The Quebec native then met Russia’s Mikhail Igolnikov in the semi-finals, where both judokas scored Waza-aris; Krieber-Gagnon then took the lead with a Yuko and went on to victory.

“That was an impressive win because the Russian has not lost an international match in the past three years and was seen as the clear favorite to win,” explained Beaton.

In the final round, Krieber-Gagnon defeated the Netherlands’ Frank De Wit by Waza-ari to win Canada’s second World Championship of the weekend. Ontario’s Jessica Klimkait took the title in the Under 52kg category Friday in Miami.

“The Dutch came roaring back in an effort to try to tie the match, or score enough penalty points to win. In the end, Louis had enough energy to hold off his opponent,” said Beaton.

In the same division, Quebec’s Olivier Gobeil St-Amand was dominated by Mattias Kuusik in the opening round; the Estonian scored a Yuko twice before ending the fight in his favour by Ippon.

In the Under 73kg, David Boucher won his first bouts by Ippon over Panama’s Heminio Diaz and Argentina’s Marcel Rusch. The Quebecois judoka was eliminated in the third round by Lovro Kovac from Croatia.

In women’s competitions, both Canadians in action in the Under 57 kg class were halted in their first rounds. Quebec’s Ève Brochu-Joubert was defeated by Russian Tatiana Zadorozhnaia who won by Ippon. Ontario’s Mackenzie Burt was similarly defeated the Netherlands’ Gaby De By.

Adriana Portuondo Isasi was also defeated at her first bout in the Under 63kg class. After obtaining a pass into the second round, the Quebec native lost by Ippon to Netherlands’ Lisa Mullenberg – the latter who finished the day on the third step of the podium.

On Sunday, Quebec’s Mina Coulombe (Under 70kg) and Ana Laura Portuondo-Isasi (Over 70kg) as well as British Columbia’s Sam Kim (Under 90 kg) and Jeff Swadden (Over 90kg) will be competing in Miami.